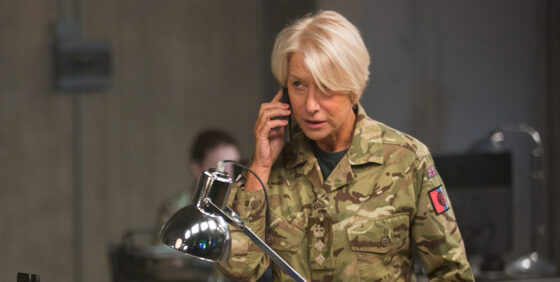 “In war, truth is the first casualty,” Aeschylus assures us on the opening crawl of Eye in the Sky, which only partially accounts for why Gavin Hood’s dramatic thriller feels mostly phony. Actually, there’s something authentically Greek—Socratic, even—about the film’s structure, which toggles between various American and British political and military authorities trying to sign off on an air strike against a houseful of Kenyan terrorists suiting up for a suicide mission. Guy Hibbert’s script is downright dialectical in its consideration of why launching a drone-mounted missile despite the likelihood of civilian casualties is both absolutely necessary (to prevent more carnage later) and monstrously (if not illegally) incorrect. The triggerman is teary-eyed Aaron Paul; his CO is Helen Mirren in I’m-the-motherfucker mode; she answers to anguished Alan Rickman; the put-upon agent on the ground is Barkhad Abdi, thankfully cashing a cheque after Captain Phillips (2013). Hood, licking his professional wounds after the blockbuster dud of Ender’s Game (2013), uses digitally augmented God’s-eye views fluidly and effectively in his quest to be the new Paul Greengrass, and the borderline comic escalation of the scenario (mostly around the fraught and frustrating presence of a young girl who obliviously refuses to exit the target site) suggests Strangelove-ian satire—the buck keeps getting passed even after the higher-ups promise to stop it. But the acting and staging are chasing a post-Bigelow realism that simply doesn’t hold amidst such grinding contrivance.