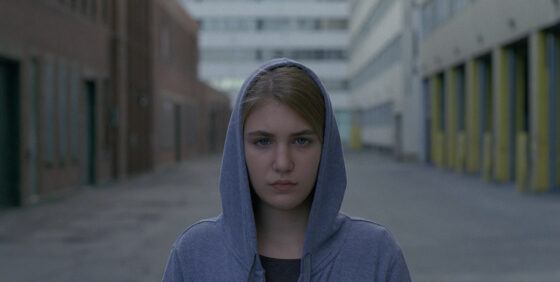 Freed from the constraints of shooting Instagram-style for Xavier Dolan, André Turpin amply fills the wide screen in this, just his third feature in 20 years. Hopefully, he didn’t spend too much of the time since Un crabe dans la tête (2001) fretting about the substance of this ostensible subconscious odyssey, which slips between the dream states—or are they astral projections?—of a woman named Simone, who is played at three different ages by three actresses (Sophie Nélisse, Mylène Mackay, and Lise Roy) whose main job is to look dazed and confused in between fainting spells, although Roy also gets to deliver a (literal) running seminar on time and space that serves as a vehicle for her director’s intellectual noodlings. (Let’s just say that Rust Cohle isn’t the only one wondering if time is a flat circle.) Turpin shows real confidence slicing through mental and physical spaces—aided by that old self-allegorizing cinematic standby of hypnosis—but that doesn’t mean that he or his unrewardingly puzzling film get anywhere in the end.