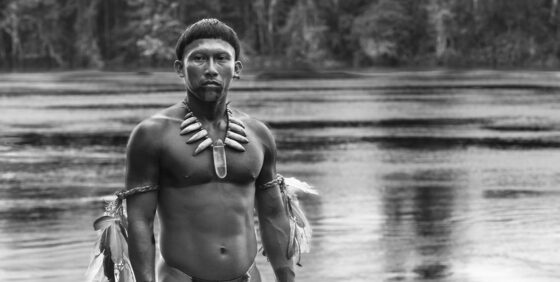 Ciro Guerra, taking after Werner Herzog, understands the influential power of research narratives when it comes to representing a nation’s colonialist past—especially with regards to meticulous details. Why else would the chief selling points in the loglines of his last two features boast of these productions’ pedantic commitments to, e.g., a surplus of filming locations—as many as 80 for The Wind Journeys (2009)—or the purportedly record-setting inclusion of nine languages (some of them dead) in Embrace of the Serpent? But who cares, really, when the colonial legacy supposedly at the heart of the latter’s concerns are so shoddily and offensively dramatized that they might as well have been resigned to window dressing?

Guerra’s game, far as I can tell, is one of posturing via rote understandings of de rigueur thematics (viz. nationalism and colonialism) and arty aestheticism, neither of which he has any sort of exceptional handle on. High contrast black-and-white Scope photography of the Amazon jungle is not breathtaking a priori; said black-and-white photography does not recall Miguel Gomes’ infinitely more considered and superior colonialist critique Tabu (2012), much as we’d all rather be watching it; Jan Bijvoet is not Klaus Kinski just because he’s white and gaunt with straggly hair; and an out-of-nowhere psychedelic finale is not mesmerizing or transporting simply because it evokes, i.e., plagiarizes 2001: A Space Odyssey‘s Star Gate sequence. These are but reaching gestures from an artist who is willing yet unable to present to the world an original idea.