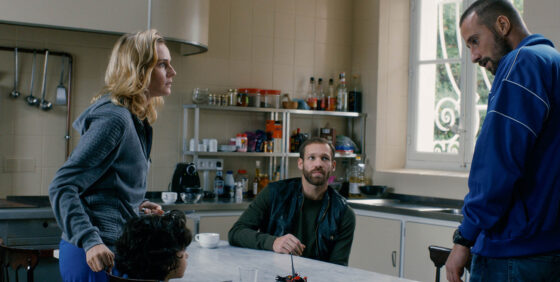 Alice Winocour’s Disorder—that’s of the post-traumatic stress variety, no pigs unleashed on congested Guangzhou highways here—occupies a point on the line one could conceivably trace between Claire Denis’ cryptic, visceral genre pictures and Kathryn Bigelow’s post-“Shock and Awe” work. Which is to say, stylistically speaking, this has nowhere near the same DNA strands that produced Winocour’s (very fine) period drama Augustine (2011), which was likewise concerned with a character’s ambiguous patho-physiological condition (viz. hysteria). Working against the mannered, determinedly art-house aesthetic employed there, Winocour here fashions a gelid, mysterious, and damn unnerving take on the home-invasion picture that coasts on spectral intrigue, a steely Gesaffelstein score, and the innervating allure of not-knowing.

The film’s goofy narrative, wherein a PTSD-suffering bodyguard named Vincent (Matthias Schoenaerts) struggles to protect a wealthy Lebanese businessman’s wife, Jessie (Diane Kruger), against perhaps-phantasmic threats, is wisely backgrounded in favour of moody, near-impressionistic glimpses of figures in crisis–that is, until it isn’t, and the film takes a not-quite-fatal nosedive into movie-of-the-week cliché. (Will Vincent’s Afghanistan-induced mental anguish prevent him from securing and seducing his comely object of protection? Stay tuned.) Until it breaks, though, Winocour demonstrates such a lucid propensity for throbbing, combustible action that I sincerely hope she spends more time toying around in this terrain, albeit without whatever compulsions that led her to betray the integrity of her film’s abstraction.