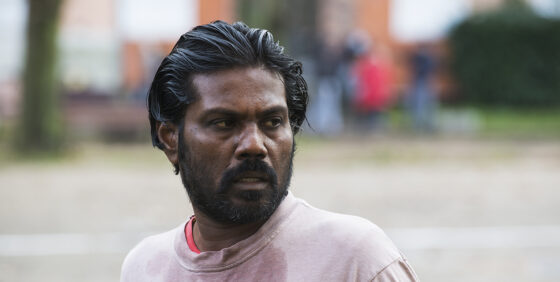 Jacques Audiard is up to his old tricks. Just as Un prophète, his 2009 art-house success, cynically recycled an admixture of motifs from old prison films cross-fertilized with a dollop of Scorsese-like pizazz and a superficial veneer of social commentary, Dheepan sheds a few crocodile tears for the plight of a burnt-out ex-Tamil Tiger before congealing into a tepid thriller. It appears that only a film this empty could have entranced the Coen Bros. and the 2015 Cannes jury, which passed up worthier candidates and awarded it this year’s Palme d’Or.

Audiard’s ultra-schematic fish-out-of-water story chronicles the travails of Sivadhasan (played by Antonythasan Jesuthasan, a Franco-Sri Lankan literary figure who delivers an admittedly remarkable performance), an immigrant with a knack for survival who acquires a new identity and a passport by arranging a bogus marriage with a woman named Yalini (Kalieaswari Srinivasan) to avoid languishing in a refugee camp. Although this is a plausible premise for a humanist drama—and suggests a departure point that might have been intriguingly fleshed out by, say, the Dardennes—Audiard squanders an opportunity to make a complex statement about peculiar culture clashes, not to mention personal and political animosities, that lead inexorably to eruptions of violence. Adrift in a particularly grim banlieue, the ghosts of the past come back to haunt Sivadhasan in a fashion that’s so mechanical and clichéd that it’s difficult to take the film’s initial stab at social realism seriously. The French critic Vincent Malausa recently assailed Dheepan as “arrogant and stupid.” For some of us, it’s merely banal and forgettable.