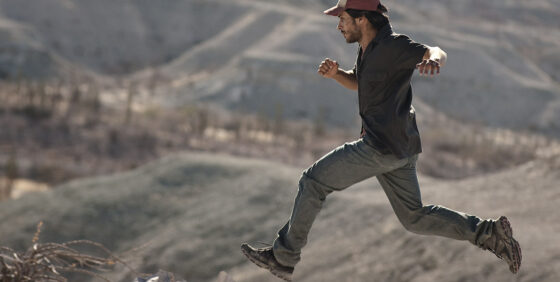 “Welcome to the land of the free,” growls self-styled border patrolman Sam (Jeffrey Dean Morgan), mere moments after shooting up a group of Mexicans trying to sneak into the United States. With his pickup truck, sleeve tattoo, antenna-mounted Confederate flag and “Don’t Tread on Me” sticker—not to mention his high-powered rifle—he’s the very portrait of Ugly Americanism (not to mention a likely Trump voter). The subtext here is clear, and leaving aside the plausibility of whether or not a private citizen would or even could spend his hours hunting and killing illegals mere miles from the highway, Jonás Cuarón’s Desierto has a certain abstract, conceptual power. By the time our shit-kicker villain is facing off against Gael García Bernal—playing the most resourceful (and bullet-proof) member of the crossing party—the film has become something like a politicized version of Duel. Other possible points of reference for Cuarón the Younger here include No Country for Old Men (flat landscapes, killer dog), Dead Calm (cat-and-mouse chases, fun with flare guns), Chuck Jones’ Road Runner cartoons, and the filmography of su padre (hurtling, ground-level tracking shots and a canned-ambiguity ending that quotes Children of Men). Give credit where it’s due, though: like Jeremy Saulnier’s Blue Ruin, which it also faintly resembles, this is a thriller with a sense of pace and spatial dynamics acute enough that we might forgive the basic familiarity of the entire enterprise.