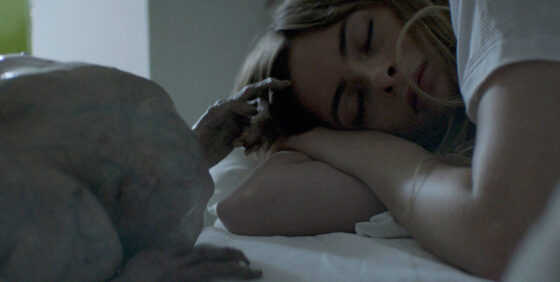 What Kim Gordon is doing in an arty, Berlin-set German genre movie is anybody’s guess, but the strangeness of her extended cameo as an empathetic high-school English teacher at least interrupts the surrounding monotony. In his feature debut, pseudonomynous German video artist (and Banksy associate) AKIZ stages the same scene over and over again: alone in her room at night, teenage wasteoid Tina (Carolyn Genzkow) gets spooked by the sound of an unearthly intruder and tries to find him, to no avail. Until, inevitably, she does, and a skillful but familiar exercise in horror tropes gets transformed a mutant cousin to E.T.: the story of a lonely kid whose melancholy (and biology) become tied to a goblin-like BFF. It’s all a metaphor, of course: the bulbous grey beastie is a stand-in for Tina’s self-loathing and body-image issues, and just as predictably, the subtext is Parents Just Don’t Understand. On a formal level, the only thing that really distinguishes Der Nachtmahr is the thermonuclear sound design, which blows up every time the characters enter an underground night club.