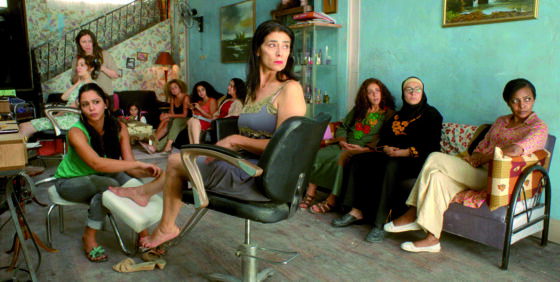 As ambulatory mammalian metaphors go, a manacled and toothless lion is pretty shaggy stuff: chained passively outside a Gaza Strip hair salon operated and populated by a group of women, the poor beast stands in for a society under the thumb of violent ideologues. A kind of distaff Dog Day Afternoon shot almost entirely in one location and in quasi-real time, Dégradé means to comment on life during wartime using the voices of its dozen or so lead characters, who get stuck inside the salon when Hamas comes in with both barrels blazing to rescue the lion. There is certainly a lot of criss-crossing dialogue—most of it so on the nose that the script (by dashing twin co-directors Arab and Tarzan Nasser, the latter of whom also appears as the cat-napper) practically has a deviated septum. The idea to represent a whole welter of contemporary issues, from the politics of occupation to the practicalities of rationing, via the cinematic equivalent of a bottle episode is already stifling even before the clichés come marching in. And while it’s great to see a Middle Eastern film where the significant figures are all female, believable exchanges and motivations are few and far between. The best moments come courtesy of the unimpeachable Hiam Abass, as the tetchiest—and thus funniest—member of the ensemble.