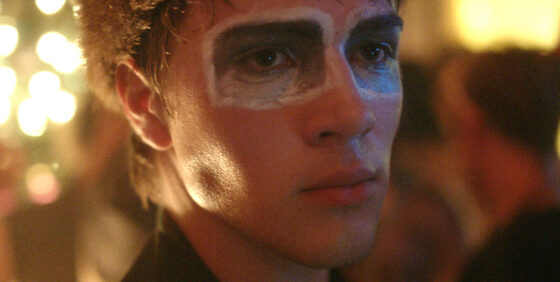 Murder, masturbation, melancholy, molly—this is one overstuffed Canadian debut feature. Perhaps they should have cut the talking hamster. That said rodent squeaks with the voice of Isabella Rossellini marks a casting coup for this low-budget Newfoundland production about the growing pains of a moody teen. The arch campiness of Rossellini’s bits blends uneasily with the generally morose tone imposed by writer-director Stephen Dunn, an experienced short filmmaker who overextends himself in a longer format. As its title suggests, Closet Monster is about lurking sexual anxiety: after stumbling upon the aftermath of a hate crime as a child, Oscar (Connor Jessup) has a tortured relationship with his own hormones, made worse by the fact that Dad (Aarom Abrams) is a not-so-subtle homophobe. As a meditation on the old nature-vs.-nurture question, Dunn’s film comes down on the side of externally conditioned pathology: Oscar’s tentative queerness seems like a by-product of his broken home and bruised psyche, which in turn feel cruelly jerry-rigged by a filmmaker trying to make something at once empathetic and idiosyncratically stylish (i.e. the intermittent eruptions of early-Cronenbergian body-horror shock effects, which are there just to goose the audience). Jessup holds the camera like a star (as he did in Blackbird), but it’s not quite enough to put the film over the top.