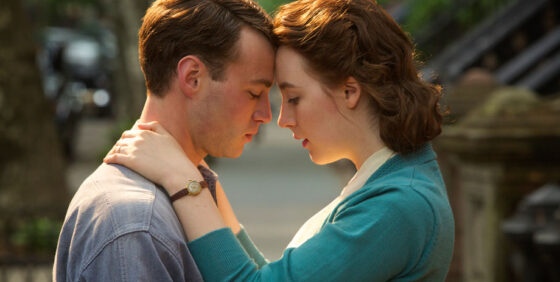 A textbook example of international co-production funds well spent—note the flashy film-festival slots from Park City to Manhattan—Brooklyn arrives duly hyped, and disappoints just as reliably. Encouraged by her prematurely spinsterish sister to flee the Emerald Isle for the figuratively greener pastures of America, Ellis (Saoirse Ronan) spends her first year Stateside staving off homesickness, and then, just when she’s gotten herself settled with a cute Italian boyfriend (Emory Cohen), heads back home. Scripter Nick Hornby and director John Crowley dramatize this visit as if Ireland and its charming residents were the Mafia and our heroine Michael Corleone: just when she thought she was out, they pull her back in! There’s a powerful idea here, which is that to be an immigrant is to always lead a sort of double life, and yet neither the filmmakers nor their star really pull us inside that sense of identity crisis. Instead, Ellis’ interior torment—externalized via a late-developing overseas love triangle that never feels as threatening as it should—is just a pretense for a string of painstakingly crafted prestige-pic scenes, any one of which is admirable on its own terms but which ultimately add up to little more than a show of self-conscious “quality.” This is the sort of movie where instead of having somebody say what year it is, they talk about going to see The Quiet Man (1952) and add that it was set in Ireland—you know, to remind us of how much that seemingly offhand detail should resonate. Which of course is precisely why it doesn’t.