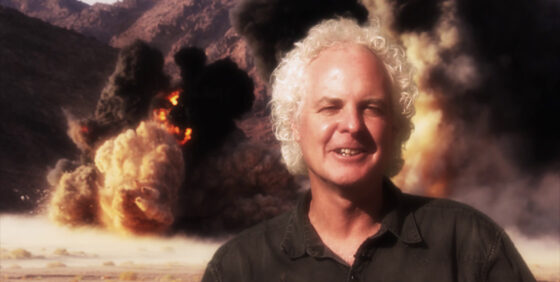 Wherein Guy Maddin, Evan Johnson, and Galen Johnson give Paul Gross’ wannabe populist war epic Hyena Road a right and proper cuadecuc-ing. Who would have thought Pere Portabella’s legendary experiment shot on the set of Jess Franco’s Count Dracula (1970) would inspire not one, but two films at this year’s TIFF—well, three, if you include Ben Rivers’ short A Distant Episode alongside his feature The Sky Trembles and the Earth Is Afraid and the Two Eyes Are Not Brothers (which, likewise, is also inspired in part by Sam Peckinpah: a worm’s tail indeed!). Along with being fucking hilarious, Bring Me the Head of Tim Horton (a.k.a. Gross and Grosser) is a bona fide exploration into the depiction of violence in the cinema (video or emulsion, doesn’t matter), doing for the war film what Portabella did for the vampire movie. Does this make Stephen Harper a present-day Francisco Franco? You make the call.

Shot on the margins of the Jordanian shoot of Gross’ big-budget production, this mash-up is pitched as a kind of literal director’s monochromatic fever dream behind the scenes, as Canadians in uniform go about playing real soldiers, stalking their prey video-game-like. Why Maddin is wearing all black in the middle of the desert, lying on the ground supposedly playing a Taliban extra, is one of the many questions the film/installation only partially answers. Other pertinent queries include: Who or what is speaking the pseudo-intellectual gibberish that includes such memorable phrases as “the abandoned chesterfield of ontology?” Why did Paul Gross agree to this in the first place, and how the hell did Maddin and the Johnsons get away with it? Will this ever be shown again in public?

Bizarrely installed in the lobby of the Bell Lightbox on a lowly flat screen TV next to a massive cardboard digitized head of Paul Gross, and only allowed to be displayed after Gross’ world premiere, Bring Me the Head of Tim Horton deserves to be seen in a cinema, in the middle, if not superimposed atop of, Hyena Road. Maddin et al.’s kind-of making-of job-for-hire (while prostrate on the sand, Maddin says he’s in it for the money, and I hope he actually got paid) subverts the aims of all war films, I assume Hyena Road included. I’ve yet to see Gross’ film and likely never will, doubt Maddin has or cares to, but Adam Nayman’s review can be found here tomorrow. One niggling criticism: at a scant 30 minutes it’s far too short; surely the last sequence could have been extended to encompass the entirety of Guy Lafleur’s “Scoring,” a track from his disco album Lafleur! Despite that, I give Bring Me the Head of Time Horton four-and-a-half stars.