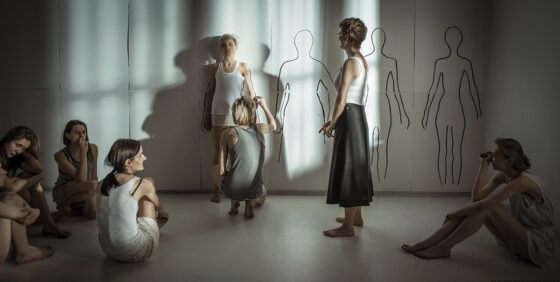 One of the dreariest films to receive a showcase as a “Special Presentation” at TIFF in recent years, Malgorzata Szumowska’s Elles (2011) starred Juliette Binoche as a journalist investigating the plight of students earning a living as prostitutes, the resulting farrago illuminating neither the intricacies of the French sex industry nor the ethical responsibilities of journalists. Body, Szumowska’s new film, finds the director returning to her native Poland and mining an amalgam of drama and whimsy that, however problematic, is infinitely preferable to Elles’ pulpy inanities. In a stab at contrapuntal narrative, Body juggles the idiosyncrasies of three interlinked protagonists: a nameless prosecutor cum coroner, who examines crime victims’ corpses with eerie detachment; his daughter Olga, a young woman in the throes of anorexia who is still in mourning for her late mother; and Anna, Olga’s eccentric therapist, whose methods borrow more from the occult than from standard psychiatric procedures.

Body is most intriguing as an examination of how obsessions we associate with the consumerist West—a concern with body image and resultant “body shaming”—have now migrated to the formerly Communist East. Szumowska has an eye for absurdist details: the scenes chronicling Anna’s unorthodox therapeutic regimen provide some of the film’s most enjoyable interludes. Still, Body creaks along to a disappointingly bland conclusion, the mini-narratives never quite coalescing into either a series of salient character studies or a coherent critique of contemporary Polish mores.