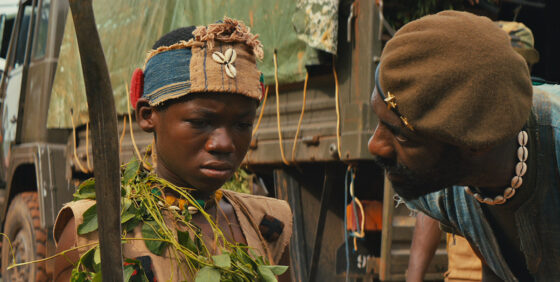 Lodged somewhere in spirit between two defining moments of its protagonist’s horrific trajectory into a child-soldier abyss—a swift machete blade etched, thunk, into a suspected enemy’s skull, and a corruptive, charismatic leader’s luring of a young disciple to his abusive lair—Beasts of No Nation holds sway with cogent, putrid effect, at once terrifying and sickly seductive. Adapting Uzodinma Iweala’s raw and unflinching novel, its narrative related from a boy’s tormented yet lucid point of view, director Cary Fukunaga goes for broke in that hallowed genre of the “visionary epic” (Coppola, Herzog, Mereilles having inhaled much of its available, rarified air). Beasts’ young Agu (Abraham Attah, cast from the streets of Accra) is the narrator who, torn from his family amid violent civil war wracking an unnamed country in western Africa (Nigeria in theory, Ghana in actuality), enlists in a militia to avenge the murder of his father and brother. Adopted, in paternalistically clichéd fashion, by a swaggering Commandant (Idris Elba)—who appears to be channelling Sani Abacha and Fela Kuti in equal measure—Agu finds a surrogate family among this tribe of warriors fighting against an abstract enemy in jungle trenches and despoiled villages. The Commandant’s emancipatory rhetoric functions like a narcotic for the dispossessed, though increasingly the wearying army is high on little more than snorted gunpowder.

The merciless march of revolution soon corrupts, with Agu finding himself scarcely a victim but instead the author of Beasts’ atrocity exhibition, an orphan who now rives families. His degradation becomes the source of the film’s dramatic wage: no longer identifiably innocent, can Agu still redeem himself in the face of a self-deceiving survival instinct that has turned this boy into a monster? As narratives go, this arc renders Beasts into something of a fairy tale (albeit grotesque and blood-stained), in spite of appearances to the contrary: call it neato-realism, for the Academy.

What made Iweala’s novel so modestly transgressive was Agu’s use of language, his halting English that made poetic sense in the context of the war’s abjection. Some of this is retained in Fukunaga’s otherwise thrusting transliteration (and Agu’s breathy voiceover), but a sense of bombast prevails at the expense of nuance. The sense of scale is proportioned to exact maximum response—oh, the horror—while Fukunaga’s genuine talent of wresting revealing details from minor moments is leased out to grander themes (imagine a film in which lesser moments speak, such as when Agu and the Commandant, wholly parched, are seen sipping water from plastic bags).

The film’s opening frame is, tellingly, just that: a television frame scrapped from the family home and purposed into a mise en scène device for the kids to enact genre machinations for the villagers: kung fu, 3D, and other diversions. “Our country is at war,” intones Agu, “so we’re finding ways of keeping busy.” Imagination TV, the kids call it, unwittingly implicating Fukunaga in an act of “imagination” cinema, so dedicated to its relentlessness of purpose that alternate visions of lesser grandeur become improbable. Pity, because the director can’t return to his cinematic orphanage, sin nombre, where the incubation of concern is still seeking expression rather than flaunting it.