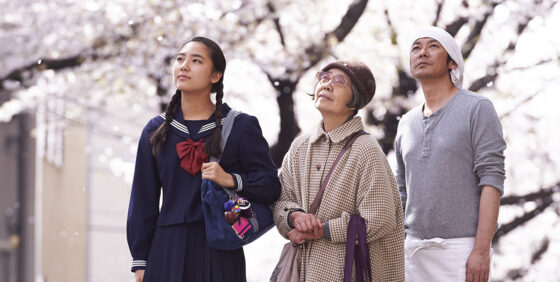 In An, Naomi Kawase returns from the ocean she explored in her ambitious, ultimately stillborn Still the Water (2014) to take up residence in the far more cloistered location of a Tokyo kitchen. Named for the sweet red bean paste that goes in the middle of a dorayaki pancake, An focuses on Sentaro (Nagase Masatoshi), the proprietor of a small bakery who is searching for a part-time employee. One day, Tokue (Kirin Kiki), a mysterious woman in her mid-seventies, turns up and convinces Sentaro to let her take the job. She brings not only her secret recipe for an, but also a surplus of musings on “nature-in-life.” Both seem to possess some magical ingredient, for Sentaro’s business begins to boom virtually overnight. Sentaro and Tokue become friends, and soon the shy, young Wakana (Uchida Kyara), one of the bakery’s regulars, joins in on the culinary bonding.

An is yet another exploration of Kawase’s pet themes of family, tradition, and nature as source of eternal truth. The character of Tokue—who talks to beans, expresses delight in the sheer act of breathing, and generally functions as the queen fairy of this tale—actually has her charms, but Kawase lacks the taste for this sort of drama, in which the reaching after the “poetic” needs to be very carefully measured. Despite its scattered virtues (primarily the beautiful cinematography by Shigeki Akiyama), An is flat as a pancake, but lacks the paste: it strives to be an intimate, incisive portrait of three lost people learning to find some direction in their lives, but Kawase’s appetite for schmaltz swallows everything before it.