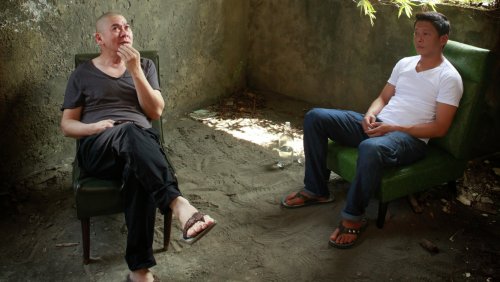 Following the release of his 2013 film Stray Dogs (a work that some consider his masterpiece), Tsai Ming-liang announced his retirement from feature filmmaking. He’s been busier than ever since this alleged bowing out, producing a stage play and the Walker series of medium-length films (Tsai released the latest one, No No Sleep, earlier this year). But it is clear that his work has fundamentally changed. Afternoon is a feature-length experimental film that could be taken as the most complex DVD extra ever made. But for devotees of Tsai and his onscreen alter ego, actor Lee Kang-sheng, the film is hypnotic, even as the perversity of its stasis prompts a viewer to wonder whether it has a trajectory or is simply going where it will.

Afternoon consists of several long takes from a single camera set-up, in what appears to be a roof deck in the new mountainside home where Tsai and Lee cohabitate. The space is dark and grungy, but the foliage and sun visible through the windows provides a sharp colour contrast. With the unmoving camera trained on the two men in chairs, and only an occasional boom mic or photographer’s arm peeking in to break up the composition, the look of Afternoon is very much Warhol-meets-Apichatpong.

But the long, long conversation, which is dominated by Tsai (Lee doesn’t really speak for the first hour), is a different matter. In pacing and lopsidedness, one may think of My Dinner with Andre (1981), but a much clearer comparison would be Godard and Mieville’s Soft and Hard (1985), since the main topic of the discussion is the pair’s career together and how it has affected their deep, almost Romantic friendship. Tsai speaks about his poor health, which affected his decision to retire. They joke with one another, which allows us the pleasure of hearing Tsai’s childlike giggle. But above all, Tsai spends much of Afternoon singing Lee’s praises as an actor and a human being, going so far as to say that his leading man/best friend was a gift from God. Afternoon is a rare and lovely cinematic expression of gratitude.