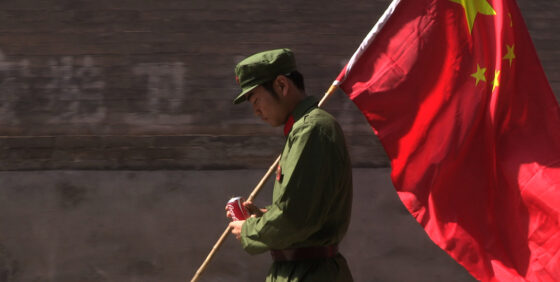 Hey, look! A film from the New Chinese Documentary Movement! Usually when this happens, it’s because a Wavelengths slot has been given to the latest from Wang Bing. But this somewhat rare appearance in TIFF Docs by a Chinese doc makes a bit more sense once you discover that it’s co-produced by the Independent Television Service (producers of PBS’ Independent Lens). This isn’t a problem in itself, and Du is certainly an insightful filmmaker, as evidenced by his 2009 effort 1428, an in-depth study of the aftermath of the 2008 earthquake. However, A Young Patriot is an unexpectedly audience-friendly film for a number of reasons.

For one thing, it’s a character study. Du profiles Xiao Changtong, a young man whom we first meet in the village square of his hometown of Pingyao in Shanxi province, in Mao-era military khakis and waving the flag. He’s yelling slogans and clearly out of step with those around him. In private, he expressed admiration for the Party, speaking naturally in empty phrases like “the nation is the government,” and “there are no individuals if there is no nation.” Once he enters Chandu University, Xiao’s views change, and he becomes involved in more direct activism. He discovers the gap between party ideology and actually existing Communism, particularly as it is currently practiced under market reforms. Whereas in college Xiao was using photography to assist with Party functions, by the end of the film he is using video as a counter-surveillance tool to protest the destruction of his grandparents’ home by pro-growth functionaries, in the name of progress.

Although there’s no doubt that the evolution of Xiao’s thinking is sincere, it’s also readymade for a Western viewership. One imagines it will be easy for cynical defenders of capitalist “democracy” to see Xiao’s devotion to Chinese Communism as ridiculous, and his gradual acceptance of global neoliberalism as somehow natural. But more troubling is Du’s narrow focus, which turns an entirely comprehensible social shift within China’s younger population into a kind of personal narrative, a set of awakenings in response to one man’s broadening perspective. If there is a way in which A Young Patriot asks to be read against the grain, it’s in the fact that Xiao is strikingly average, a blank slate upon whom the times inscribe themselves. But Du’s documentary, following the unspoken “star system” of US mainstream documentary, keeps its sights on him, as though his charisma and mundane revelations were the true topic of interest.