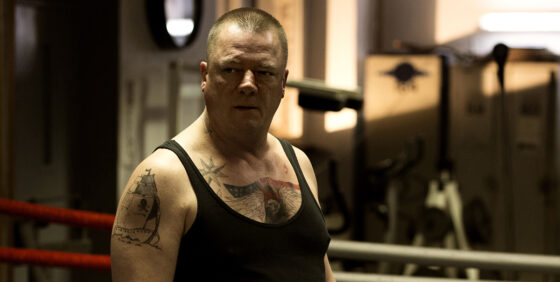 Student Oscar nominee Thomas Stuber makes his first tentative mark in features with A Heavy Heart, a close-quarters profile of unsmiling musclehead Herbert (Peter Kurth), whose heyday as a boxer in East Germany—he almost but didn’t go to the Olympics, as his friends remind him—is long gone post-reunification. Now a hired goon as well as a trainer, and prone to debilitating muscle spasms, Herbert is one medical diagnosis away from a drastic life change that, naturally, will find him yearning to reconnect with the estranged daughter whose life he ruined when he was hauled off to jail some time ago. Stuber is an admirably restrained storyteller for such an upstart, generally resisting the urge to push for a more momentous trajectory for the newly eye-opened Herbert, who goes from troubled guy to slightly less troubled guy with a disability. Though his tendency to read Herbert’s tattooed body as a biographical text feels derivative, cribbed from more accomplished corporeally-obsessed filmmakers like Jacques Audiard, it’s mitigated by character actor Kurth’s shaded lead performance as someone learning to make his body signal things other than terror once he’s faced with the possibility that he might have ALS. There’s something refreshing, too, in Stuber’s emphasis on the livable monotony of Herbert’s daily routines once his illness sets in, a still-too-rare depiction of disability as a continuous state rather than a grotesque corruption of Herbert’s ideal form. It’s too bad about the tired, played-out script, which trades in heavy-handed analogies about the correspondence between endurance in boxing and perseverance in the face of illness, losing its way for good in a hammy montage that sees Herbert falling to the floor in a vodka-and-pain-induced fit just as his idol George Foreman does the same on an old fight recording. Stuber might grow out of these tics with time, but for now he’s a competent realist with a good eye for casting.