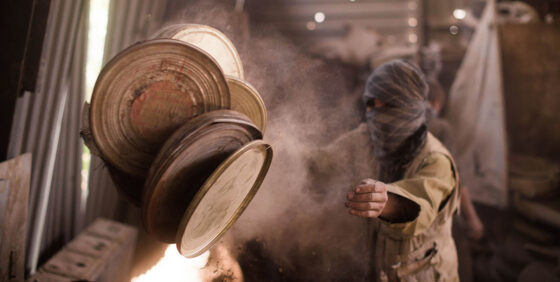 New Zealand documentarian Pietra Brettkelly’s A Flickering Truth focuses on some of the most intrepid preservationists to ever apply their talents to resuscitating celluloid: the staff of Afghan Film, the national film institute dedicated to housing Afghanistan’s imperilled film heritage. Brettkelly’s protagonists are a bickering group of cranky but idealistic film buffs, especially Ibrahim Arify, the archive’s slightly autocratic chief, and Isaaq Yousif, an elderly gent who resides in one of the archive’s back rooms and has devoted his life to cinema. It’s difficult to think of anything more quietly heroic than rebuilding an institution where many of the films have turned to dust after years of neglect (the Taliban was fanatically hostile to cinema during their years in power), and where the premises might be obliterated by a random act of violence at any moment.

The excerpts Brettkelly includes from films in the archive’s collection are particularly revelatory. Newsreel footage of the Taliban’s execution of President Mohammad Najibullah, the Soviet puppet whose death marked the end of an era in Afghanistan, is truly unsettling. On a lighter note, an excerpt from Love and Friendship, the oldest fiction film in the archive, reminds us that Afghan cinema once shared much in common with Bollywood melodramas. Scenes featuring children raptly viewing some of Afghan Film’s gems are a bit reminiscent of the interaction between the audience and the screen in Kiarostami’s Shirin (2008). Filmgoing is affirmed as a communal experience that can transform lives in dark, uncertain times.