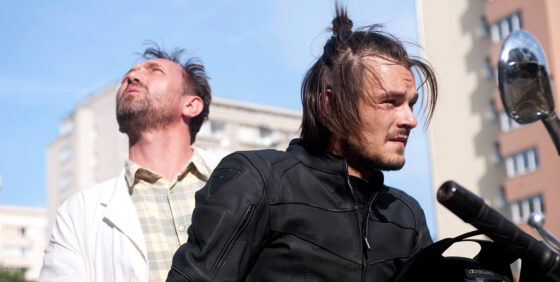 In his unorthodox answer to Hollywood action movies, Jerzy Skolimowski has made a film that is more than (or maybe exactly) what it seems. In narrative terms, there’s the (unconscious) battle for survival of a human pack that faces its destiny between 5:00 and 5:11pm on a given day. The extraordinary here is that, within the tight geometry of his script, Skolimowski frees himself from cinema’s psychological burden. There are still some psychological traits here and there—a husband’s jealousy, a sentimental break-up—but most of the intertwined stories unfold without clearly exposing the characters’ motivations, which remain suspended in a limbo of suspense.

This anti-psychological strategy is nothing new to Skolimowski. The old master’s 1967 masterpiece Le départ featured a crazy-young Jean-Pierre Léaud compulsively trying to steal a Porsche, while in 2010 Skolimowski set Vincent Gallo against wild nature and the Calvary of present-day ideological darkness in Essential Killing. 11 Minutes can be seen as a mannerist extension of this project of cinematographic essentialism. In a clever move, the Venice Film Festival scheduled 11 Minutes on the same day as the premiere of Baumbach-Paltrow’s doc De Palma. 11 Minutes left me hanging from the same psychological vacuum (and time-movement orgy) which exploded in Femme Fatale (2002), though here devoid of genre.

Time is obviously a key element of 11 Minutes. In an astonishing game of mirages—where time expands and contracts giddily—Skolimowski manages the 81 minutes of the movie, which correspond to 11 fictional minutes, to feel like real time: a feat in which the passages of inaction planted by the writer-director in the story play a key role.

And what about the movie’s message? Encrypted in a sublime final set piece and epilogue—mirroring the frame burning in the projector in the finale of Le depart—Skolimowski sets a modern, multivocal, questioning node of meaning. What drives the characters to the abyss? Is it human despair, existential absurdity, or pure nihilist fatalism? Is there an external force that controls their destiny, beyond the director’s hand? And what the hell is that object suspended in the sky (we never really see it), which fascinates and disturb the characters? Are there voices who talk to us from the screens which surround us? And, finally, what’s the place of humanity within today’s noisy audiovisual chaos?