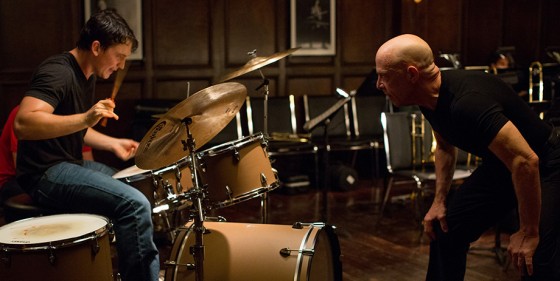 Pitched somewhere between a kunstlerroman and an Archers melodrama about the psychic toll wrought by a life of artistic commitment, Whiplash is about as off-kilter as Sundance darlings get. An extended riff on sophomore helmer Damien Chazelle’s earlier short, the film stars Miles Teller as Andrew Neyman, an aspiring jazz drummer lured to one of the finer music academies in the country by the promise of working under the famed maestro Fletcher (J.K. Simmons). Trouble is, Fletcher’s a monster, hurling abuse and cymbals at his pupils (in honour of Charlie Parker’s humble beginnings as Jo Jones’whipping boy), the better to push them to the brink of body, mind, and talent.

Whiplash doesn’t score too many points on originality: everything from Andrew’s ascetic lifestyle (borne of the Spider-Man ethos that great men must remain celibate) to Chazelle’s slow-motion montages, in close-up, of the bloodied knuckles, sweaty drum kits, and broken sticks that line his path to transcendence feels shopworn—an extended Red Shoes homage by way of Black Swan. But Chazelle has a winning conceit in the bond between the self-annihilating hero and his psychopathic mentor, wringing surprising tension out of an improbable magic-realist finale that sees the men hashing out their demonic teacher-student relationship on stage, more for us than for their immediate audience. If one gets the sense that Chazelle hasn’t quite worked out whether Fletcher is an unorthodox teacher or just a bully, it’s ultimately to his film’s credit; if nothing else, that ambivalence puts it up there with At Berkeley on the shortlist of feel-bad movies about higher education.