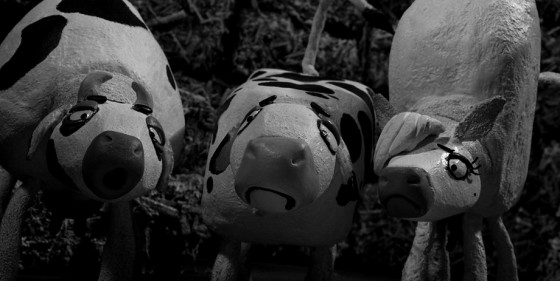 In 1987, during the first Intifada, a group of Palestinians in Beit Sahour bought 18 cows. As every action in the Occupied Palestinian Territories is imbued with a deeper meaning, these weren’t just basic bovines, but symbols of how the town could become self-sustainable (specifically, by breaking the community’s reliance on Israeli dairy suppliers). In The Wanted 18, co-directors Amer Shomali and Paul Cowan manage to milk (sorry) this story for everything it’s worth, flipping this true tale on its head and reimagining it from the perspective of these potentially golden calves.

But what’s more interesting than the novel narrative is how Shomali and Cowan approach the subject matter: a blend of first-person narration, talking-head interviews, historical re-enactments, and stop-motion and hand-drawn animation. While this mélange of mediums draws attention to the nature of storytelling itself (a key factor in the ongoing conflict between Palestine and Israel, as each side battles for the dominant narrative of righteous suffering), the mixed-bag method is ultimately distractingly chaotic. While the stop-motion is highly accomplished (no surprise in a National Film Board production), the cow characters are irksomely airheaded and their observations err on the side of simplistic adages about peace and co-existence. Admirable aims, to be sure, but overall the film is as awkward as a cow on a crutch.