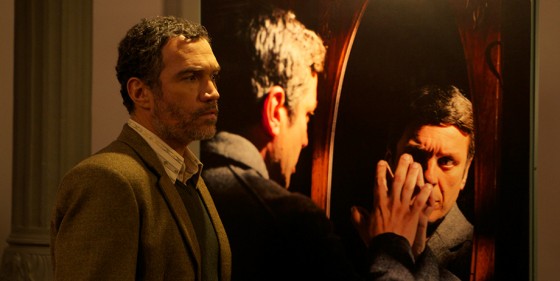 Cop turned crime novelist Edo Celeste (Salvador del Solar) is having trouble cracking the ending of what’s to be the final installment in a series of successful detective novels. That’s quite the opposite situation of the film he finds himself in: the ending of The Vanished Elephant seems to have always been fixed, and the film’s baroque design—a knotty, fascinating puzzle-plot riddled with anagrams, mirrors and doppelgängers that blur the material and the meta—at times overwhelms the story’s emotional undertow. This problem speaks to the intelligence of Peruvian writer-director Javier Fuentes-León (whom I know a little) and to the ambitions of his second feature, whose forebears include as many writers (Borges, Cortázar, Haruki Murakami) as it does filmmakers (Ruiz, Resnais, Lynch).

That puzzle-plot involves a vanished woman, a vanished man, a strange land formation, a murder, a painting, an apparent conspiracy and an envelope stuffed with photos and fragments of text that will only gradually reveal a coherent message. This is a story about enduring ambiguity, about hanging onto the past in the slim hope that what’s been lost might still be recovered, about using storytelling to rewrite and/or reckon with history. Edo still carries a gun; he still behaves as through his long-lost beloved is alive and well; he’ll play both detective and writer over the course of The Vanished Elephant. He spends most of the film baffled, and so do we—Fuentes-León is wise to keep us in step with Edo, and never let us jump ahead. The closer we get to the resolution, however, the more airless the film becomes, until the very sense of loss driving the story is itself in danger of vanishing. But stick with it.