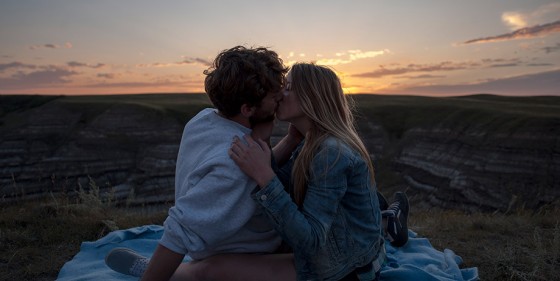 First things first: this is a pretty good film. Granted, first-time feature director Kyle Thomas makes some strategic errors, most notably a decision to organize his film around semi-independent but ultimately intersecting characters and storylines, which is the last refuge of scoundrels and fiction-workshop MFAs. This manoeuvre has the unfortunate effect of chucking The Valley Below into a kind of bargain bin of North American indie cinema before any prospective viewer has even finished reading the catalogue description, as well as subsuming any potentially interesting idea to one rather leaden dominant theme: Life is depressing in rural Alberta. (We might have guessed as much, without Thomas’ artistic assistance.) What’s frustrating is that, if you’re able to see past Valley’s shopworn organizational method, there’s a lot of subtlety of characterization here. In particular, Thomas does a fine job in locating some substance within such Sundance avatars as the self-destructive drunk (Kris Demeanor) and the introverted family man (Stephen Bogaert) on the brink of losing his identity. If all of this sounds like a highly qualified endorsement, I suppose it is—The Valley Below is really a highly accomplished example of a somewhat ignominious English-language festival-circuit specimen. However, Thomas displays great promise, and there are some very basic reasons to attempt an oversell on The Valley Below simply based on global politics. If this were an American indie at SXSW starring Brie Larson, Seth Rogen and Michelle Forbes, it would be on everyone’s Watch List. And even within the strict framework of CanCon, let’s be frank: Kyle Thomas is starting out as good as Jeremy Podeswa ever got.