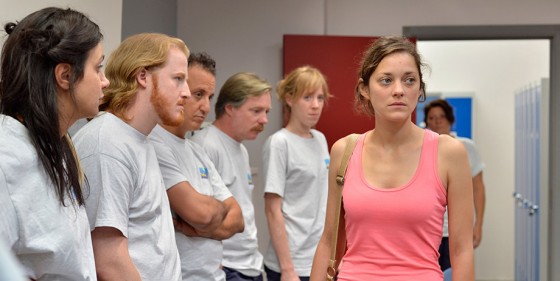 “You exist,” says Manu (Fabrizio Rongione) to his wife Sandra (Marion Cotillard) in the Dardenne brothers’ Two Days, One Night—a line which echoes another in Ms. Cotillard’s other recent auteur-film turn in James Gray’s The Immigrant (“You are not nothing”), a movie with which Two Days, One Night otherwise shares very little, except for its final shot and an attendant surge of earned feeling. Sandra needs to be convinced that she exists, not only because her employers are trying to imply otherwise (as the film opens, she’s been laid off from her job at a factory that produces solar panels), but because she’s battling an extended bout of depression—a point that has been absent from most of the reviews, both positive and negative, to come out of Cannes. In the Dardennes’ Rosetta, the main character’s single-minded pursuit of employment led many to read the film as an allegory for the post-EU underclass; while that may or may not be true in that case, it doesn’t really apply to Two Days, One Night, in which the particulars trump the broad outline of the story, as they do in all good drama. Sandra’s weekend-long attempt to talk her 16 co-workers into overturning her dismissal at the expense of their thousand-euro bonuses is about both literal and figurative worth—not so much what Sandra is worth to her fellow labourers (all flawlessly acted by the Dardennes’ biggest-ever ensemble cast) as what their support or lack thereof is worth to her, and whether the simple mathematics of a majority vote, pro or con, finally outweigh the implicit (though always generously indicated) support of her husband. In Sandra’s condition, the stakes are life and death.

It’s impossible to appreciate the Dardennes (or any great directors) without acknowledging their capacity for manipulation, which they have almost always managed to conceal beneath a skein of naturalism. The disguise slips a bit here, as it did in Lorna’s Silence, but the lapses are slight and more than balanced out by all of the smart storytelling choices around them, which begin with the decision to wildly mix up the staging, location, duration and immediate fallout of Sandra’s repeated one-on-one (and sometimes one-on-two-or-three) appeals. The cleverness of casting a major movie star as a woman without vanity or charisma is slightly overdetermined but mitigated by the strength of Cotillard’s acting, which, as in The Immigrant, is skilled in a way that doesn’t call attention to itself, even as Sandra never lets Manu (or for that matter anyone around her) forget how she’s feeling. Sandra’s recessive tendencies are a means of getting attention, and in many ways she’s no less selfish and unreasonable than Rosetta. (Attentive viewers will note that she acts out in the exact same way, except at a very different point in her story.) The differences between the two films do not imply that the Dardennes have gone soft or begun trading in uplift. If Two Days, One Night has a happy ending, it’s not one that’s been impasted, but rather coaxed out. It’s nothing more than Manu’s affirmation transferred to Sandra, and nothing less.