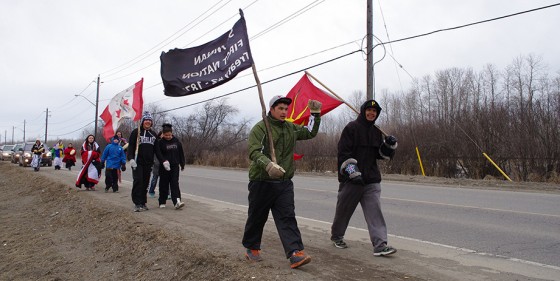 Since Alanis Obomsawin began her work with the NFB in the late 1960s, her style hasn’t much changed: talking-head interviews, heavy on narration, pedagogical to the core. True to form, the Masters-ratified Trick or Treaty? offers more of same—but rather than scanning as the work of a stymied veteran institutional filmmaker, Trick or Treaty? powerfully reaffirms Obomsawin’s long commitment to Aboriginal rights, with an emphasis on reclaiming the power of oral tradition.

Shot over two years, Trick or Treaty? uses the recent Ideal No More movement and 16-year-old David Kawapit’s 1,600-kilometre walk to the Canadian Parliament as points of entry into an examination of the lingering impact of the infamous Treaty 9. Signed in 1905 between the British Crown and Crees and Ojibways from Ontario and Manitoba, Treaty 9 was the genesis of today’s still-unresolved land claim disputes: the Crees and Ojibways, who have an oral culture, agreed to the treaty’s terms, which were ostensibly communicated verbally by the British. What was actually written on the document, however, was another matter entirely.

While any review of the film must necessarily lean heavily on a synopsis of the facts of the case, this is only in keeping with Obomsawin’s primary strength as a filmmaker: her meticulous attention to history. As always, the octogenarian director seeks to inform her audience about the realities of First Nations issues while complicating national narratives with the perspective of Aboriginal peoples. It’s deceptively simple and entirely powerful—no gimmicks, no gags, no tricks.