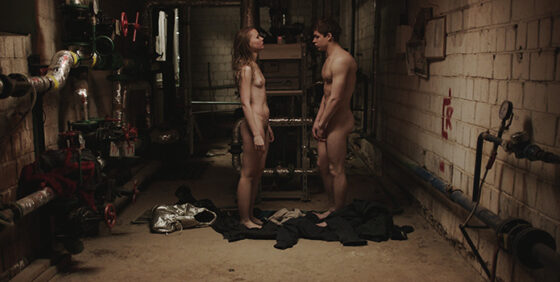 In his third short film, Diagnosis (2009), Miroslav Slaboshpytskiy shows a young working-class man—possibly the father—snuffing a newborn infant with a pillow in a hospital. In his fourth short, Deafness (2010), a cop interrogates a deaf-mute suspect by nearly suffocating him with a plastic bag in his squad car. In his fifth short, Nuclear Waste (2012), a nuke waste disposal trucker and his female companion (who washes workers’ contaminated clothes) fuck without a condom, followed by her doing a handstand to propel his sperm outside. In his first feature, The Tribe, a group of deaf-mute school kids rob, mug, and operate a prostitute ring, leading to several bodies slapped, punched, kicked, and worse—not to mention a backroom abortion presented in real time.

Because cinema is and has been dominated by liberals, progressives, and the left, there’s often an underlying humanist impulse to show minorities of all kinds in the best light. This is especially the case with guilt-ridden, class-based cinema: cinema makers, like golfers and tennis players, are almost invariably from affluent backgrounds, so depictions of society’s have-nots—even, or maybe especially, in Hollywood movies—aim for the PC target. Slaboshpytskiy not only doesn’t care about this code, he thinks it’s pretty stupid. The Tribe stunned its audience in Cannes, where it swept the prizes in the Semaine de la Critique, because it dared to not only stage an entire movie in (unsubtitled Ukranian) sign language, but to depict its deaf-mute characters as fledgling players in a ruthless criminal underworld where goods and bodies are equally disposable. Deafness was a trial run for The Tribe’s full marathon; just because characters are unable to talk or hear doesn’t mean they’re incapable of crime, and it won’t stop cops from kicking them in the ass.

In fact, it’s just the opposite. The Tribe is about revealing what is hidden from the conventional world, or that which it tends to ignore. And part of what Slaboshpytskiy wants to reveal is that deafness and muteness can be effective weapons. Like screwing a silencer on a gun or a SEAL team shifting to night vision and using hand signals, a gang of teen boys can deploy their own stealthy silence to wreak horribly effective havoc on targeted victims. No recent movie has staged a more chilling and terrifying scene than a night sequence early in the film where the gang noiselessly tracks a man leaving a market with a sack of groceries and descends on him with utter tactical precision: they have done this many, many times.

At the beginning, the camera of Slaboshpytskiy and cinematographer Valentin Vasyanovich stays so far away from central character Sergei (Grigori Fesenko) that he’s hard to pick out among riders waiting at a Kiev bus stop. Anonymity gradually dissolves during the subsequent chain of lengthy plan-sequénce shots that range from three to eight minutes and are staged using such a smooth and unobtrusive Steadicam that attention is always on the characters and never on the camera for its own sake. The movement is deliberately single-minded, accompanying Sergei as he makes his way. First, Sergei enters the school for the deaf, a firmly and professionally run operation overseen by a no-nonsense principal and staffed with teachers who steer students through such subjects as Ukraine’s current struggles with Russia and the EU (the European Union and NATO icons, symbols that make Putin’s blood boil, are on display). Like classrooms everywhere, a smart aleck tries to grab all the attention and screw with teacher; unlike a lot of movie classrooms, though, this teacher takes no guff and pretty much shuts him up. Early into this movie, a viewer with no knowledge of signing is adjusting to this world’s intensely physical use of language—hands arching back and forth and side to side, fingers flicking faster than a pianist making a run up or down the keyboard—language used for business, bureaucratic exchanges, chatting, cursing, ridicule, lecturing, power.

Silent cinema? Not at all. If anything, The Tribe’s non-verbal language and the absence of music allow natural sound to rise up from the background position it usually plays in our senses as we’re experiencing a movie. As Sergei is led away from his first day in the classroom by two older kids who look like they know what they’re doing (one, played by Alexander Osadchiy, is named The King, which, like all the other character names, we learn in the closing credits), the steady stomping of feet over asphalt or concrete hallway floors becomes the movie’s own rhythmic beat, each step a further stride by Sergei into a world he can barely imagine until he’s already too deep into it.

The school soon becomes irrelevant, barely even background fodder. Sergei quickly finds he has to stand his ground to prove his worth, and in a loose initiation, he’s slugged by two guys as the group encircles them, but he also manages to get his own punches to land. As if an invisible curtain has been drawn, he enters a kill-or-be-killed world unknown to the hearing world. Stolen goods are regularly delivered and sent out, with rats shaken down and brutalized as The King mercilessly enforces the Tribe’s rules. Get out of line and you’re kicked out of your dorm room to live with the autistic kid down the hall—if you’re lucky. The only adults are either crooks (passport forgers, “doctors” performing illegal operations) or the shop teacher (Alexander Panivan), who drives girls in the gang (Yana Novikova’s Anya and Rosa Babiy’s Svetka) to their nightly rounds as prostitutes seeking customers at a nearby truck stop.

Slaboshpytskiy’s writing is unconcerned with how Sergei survives and evolves through passages of fire to forge himself into a hard-ass Tribe member. From the start, you’re either in or out, the hell with passages. That’s another thing Slaboshpytskiy thinks is stupid: every movie about teenagers has to be about baby-step transitions, each inch a struggle followed by a glimmer of recognition and revelation. The Tribe depicts Sergei’s way as a dive into a pool of sharks, and you best learn to swim fast or get slashed to ribbons. He adapts quickly, and not only gets thuggish, but masters the art of being a pimp for Anya and Svetka as they wend their way through the maze of trucks, a sinister setting of unforgiving black and frosty nights that give the hulking machines the feeling of sleeping monsters, the Grimms’ tales of youth lost in the scary woods updated for the horror show of the 21st-century international black market.

This is a writer-director with an already well-developed worldview, which includes the notion that love leads to horrible acts (like baby-snuffing) or is so short-lived that it doesn’t really matter (gotta get that sperm out of the plumbing, pronto). The dark variations on these themes are combined here for the story’s final section, which begins with Sergei and Anya fucking because they kind of feel like it, proceeds with them sensing some feelings for each other, then an unwanted pregnancy and, finally, business getting in the way of Sergei’s growing desires. For this group, “business” means cash and goods, or fists smashing faces and feet cracking ribs.

The Tribe is interested in how far this can go, how codes of violence contain their own, often unintended, logic. In the 130-minute running time, it has erased its audience’s (presumably) well-meant, PC-laden view of people unable to talk or hear and replaced it with an awareness of something else entirely: a shadow-world economy, an underground that could care less for the rest of us and hardly cares for anyone inside it, a jungle of tribes looking only to stay alive one more day, until somebody inevitably dies. Fine talk of an EU, even the issues of sovereignty or national alliances that raged in Kiev are quaint in the context of the underground jungle—which, by latest GDP measures, is the world’s second largest economy. School’s out, and in Slaboshpytskiy’s hard cinema—a cold, long stare into the gut—it doesn’t even matter now.