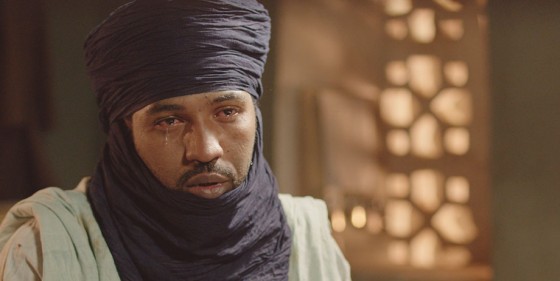 Abderrahmane Sissako’s first feature since 2007’s Bamako is a fleet, forceful response to the brief but traumatic few months in 2013 when foreign jihadists seized control of the northern Malian city and imposed Sharia law (an incursion that was eventually repelled by the former colonial power, France, which is where Sissako now plies his trade). Not surprisingly, the film exhibits scant sympathy for the rebels, whose zealotry rides roughshod over Timbuktu’s traditionally moderate Islamism. Women are instructed to cover their heads and hide their hands. Music and soccer is banned. Men with big guns storm into the mosques heedless of the Imam’s protests. Much worse is to come.

Black-and-white ideological positions don’t generally make for nuanced drama, but Sissako’s patient tempo, his supple navigation of a wide spectrum of individuals and moods (including a fair bit of humour and warmth) and disinclination to caricature even men whose intolerance marks them as his polar opposite transcend melodrama. As always, his images have an easy graceful flow and balance. This is often a very beautiful film to watch and listen to (DP Sofian El Fani shot Blue is the Warmest Color), even if it’s also difficult not to avert your eyes as the jihadists exert their merciless, calamitous authority over the lives of proud Tuareg cattle herder Kadine, his wife, and their 12-year-old child and young ward, innocents too slow to recognize the severity of their situation. For a century or more the name Timbuktu has been shorthand for an impossibly remote exoticism, at least to Western ears, but with clarity and compassion Sissako dissolves any barriers to understanding, and insists on common cause.