TIFF 2014 | The Theory of Everything (James Marsh, US) — Special Presentations 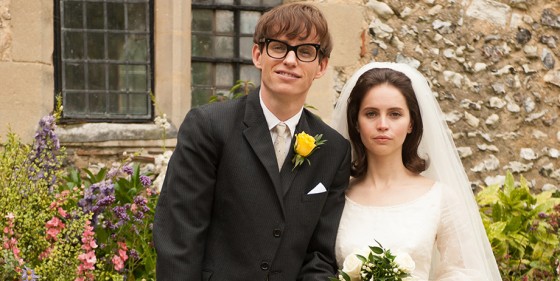 Stephen Hawking falls in love, gets disabled, and becomes the world’s best-selling cosmologist in James Marsh’s mostly undistinguished The Theory of Everything, the sort of cautious, unoffending profile that tends to arrive in swarms this time of year. For what it’s worth, Eddie Redmayne is fine as the young Cambridge scholar with the big grin and the bigger glasses, locating an insouciant charm in Hawking’s lazy doctoral years in the mid-1960s, when he met his first wife (and doctor in medieval Spanish literature in her own right) Jane Wilde and first thought his big thoughts about black holes, just before he was diagnosed with motor neurone disease. It’s the narrative around him, ticking off virtually every biopic box about genius, academia, and illness in breathtaking succession—including, most egregiously, faux-grainy home movies to note elapsed time—that leaves him stranded with little to play but the man’s physical tics and inner nobility.

Given Marsh’s placid approach, it’s perhaps to the credit of Wilde’s source memoir that the film is as strange as it is about the romantic and sexual mechanics of Stephen and Jane’s relationship. Its digressions into Jane’s special, maybe sexual friendship with a widowed choir leader and Stephen’s growing attachment to his earthier live-in nurse (his second wife, we guess) are odd fodder for a true-love story. For all his formal timidity, Marsh is also on the whole surprisingly progressive about disability, framing Stephen’s technological accoutrements as prosthetic extensions of his person rather than undignified baggage. Too bad, then, about the film’s utterly standard progression, its insistence on tracing Hawking’s ascension to the height of pop science, as if becoming a windbag lecturer on Big Ideas is all a great mind—and his partner—could ask for in life.