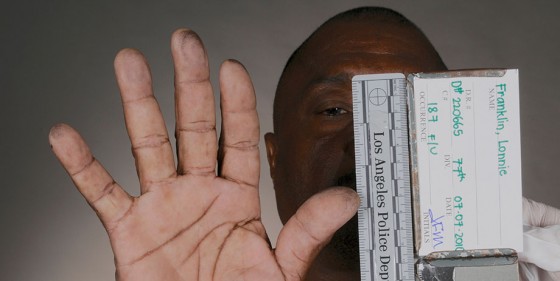 Nick Broomfield’s limey knight-errant act has had its moments of wearing thin—as in the terrible Sarah Palin: You Betcha!—but at its core it’s clever, endearing and effective. Shamelessly brandishing the tools of his trade (i.e., his ever-present, conspicuously dangled boom mic) everywhere he goes, Broomfield stylizes himself into a caricature of the crusading, muckraking journalist, which works well with all sorts of different subjects for all sorts of different reasons. It reassures the people he’s interviewing that they’re dealing with a professional, or else it suggests to them that they’re talking to a boob. Either way, they tend to open right up.

There’s a bit less of Broomfield than usual in Tales of the Grim Sleeper, but what’s there is in keeping with his past work. Returning to South Central L.A. over a decade after Biggie and Tupac, he once again plays up the incongruousness of his lily-white presence in a predominantly black neighbourhood. And, once again, his target is the Los Angeles Police Department, which Broomfield implies, indicates and then insists bungled their investigation of the eponymous serial killer, whose predations over a twenty-five-year period were barely acknowledged by local media. The director’s thesis is that the LAPD didn’t do much to look for the killer because the victims were mostly drug-addicted African-American women, and the film finds articulate mouthpieces for this point of view in the form of community activists who spent decades loudly bemoaning the situation, for all the good it did them. Ultimately, the grotesque and horrifying details about the crimes and the man who was finally arrested for them after too many years, while present in the film in as matter-a-fact a form as possible, are secondary to an institutional critique that’s that much more urgent in the aftermath of Ferguson.