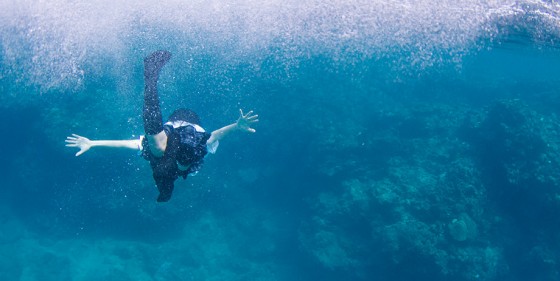 Despite Naomi Kawase’s claims prior to the film’s world premiere at Cannes, Still the Water is not her masterpiece, and it’s uncertain she will ever actually make one. However, this is her best film since Shara back in 2003, and although the same basic faults that hobbled The Mourning Forest and Hanezu are still operative here, I can at least see why Kawase has a cheering section. It seems to me that the selling point with her artistry is that she is completely out of step with contemporary Japanese cinema, if not contemporary Japan. Still the Water focuses on young love and possible crime in a tiny island fishing village, but the first things we see are ritual dances, drumming and chants. It’s not just that Kawase is as fully dedicated to Shintoism as, say, Terrence Malick is to Christianity: it’s that her fixation on the old ways creates an image of Japan that is as exotic and anthro-touristy as any unreconstructed filmmaking from the two-thirds world.

And so, this is interesting in its own way, even though it’s off-putting in equal measure, a snapshot of “authenticity” that is really as much an act of genre salesmanship as any yakuza or salaryman film. Besides, all of this would be much more forgivable if Kawase didn’t come off as such a half-assed filmmaker. Again, Still the Water represents a return to the control she exhibited in some of her earlier work, and in fact many of the landscape and aquatic shots possess a crispness that harks back to Kawase’s days as a video artist. But from scene to scene and shot to shot, there’s an egregious lack of commitment: handheld shaky-cam, then master shot, then a poetic interlude, then into classical decoupage. Half the time she doesn’t keep her subjects’ heads in the frame, and there’s nothing to indicate that this is an expressive choice. Given Kawase’s fascination with myth, symbol and ritual, and her relative lack of concern with the visual properties of the medium, it’s unclear why she doesn’t just write poetry and become the Nobel Committee’s problem.