TIFF 2014 | The Sound and the Fury (James Franco, US) — Special Presentations 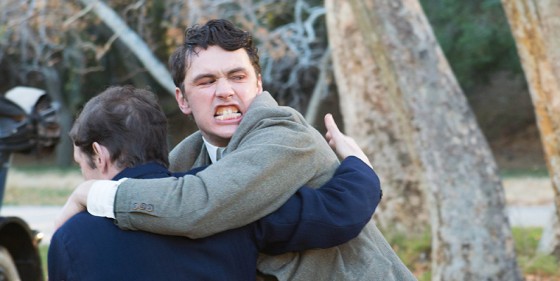 Oh boy! Where to even start? Let’s try from the beginning: a Shakespeare quote opens the film, which tells us that James Franco reads the preeminent Elizabethan playwright or Wikiquotes, which as far as the film is concerned doesn’t make that big of a difference. The guy has actually had the guts (and the money to acquire the rights, presumably) to adapt a William Faulkner novel and steal its title for his movie. Galvanized by his experience with dentures on the set of Harmony Korine’s Spring Breakers, Franco decided to try on a new pair with buckteeth to interpret Benjy, the disabled son of a wealthy southern family on the decline, the Compsons. Thankfully, we get to see Franco playing what he must believe to be a faithful rendition of a mentally impaired human being for only a third of the film: the remaining two chapters focus on the other two spawns of the Compson clan, the Harvard overachiever Quentin and the tough-guy-wannabe-next-patriarch-in-line Jason. As far as the plot is concerned, it’s enough to say that whatever Faulkner wrote, Franco defiled it, so let’s not even bother to outline it. If you have 101 minutes of your precious life to waste, go ahead and find out for yourself (though reading the original book, one suspects, might be a better use of your time). “Pretentious,” “arrogantly naïve,” “plain shit” and other flattering adjectives wouldn’t even start to describe The Sound and the Fury, whose only merit is to expose the (im)moral connivance of the film world with this obnoxious celebrity. If there were any doubts left that being a workaholic and a multi-tasker is bad (for humanity), James Franco should clear them. The only question left is: When will he retire?