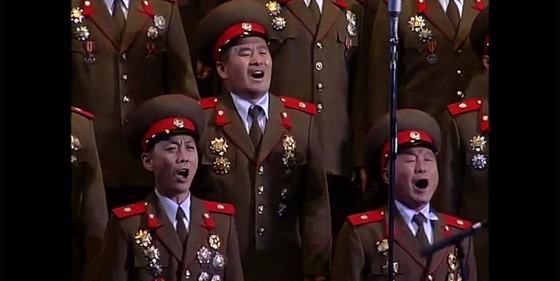 Songs from the North is a work that practically mirrors the provenance pattern of another film in this year’s festival, Kelvin Park’s A Dream of Iron: an essay film from a Korean-born, US-educated multimedia artist. However, Yoo is a more experienced filmmaker, and as a result Songs is a far more nuanced and, above all, better constructed piece of experimental non-fiction. Although the kernel of Yoo’s inquiry into North Korea is the wartime experience of her own father (a leftist law student who, unlike many of his comrades, did not head north after the war), Yoo provides a broad-ranging examination of the culture and ideology of a nation too often regarded as either ludicrous or incomprehensible. While in no way softening the all-encompassing propaganda state of three generations of Great Leader Kims, Songs from the North also displays a rare audacity by showing certain aspects of North Korean life as perfectly normal. It’s good that both Songs and Dream of Iron have a place in TIFF ’14, but it’s highly appropriate that Yoo’s film takes its spot in Wavelengths. Yoo uses her found images, North Korean official footage, and person-in-the-street interviews not as ironic “gotchas” or simple illustrations of concepts; instead, she treats them as discursive elements, operating within a complicated field of meanings. (I frequently thought about Trinh T. Minh-ha’s films, especially Surname Viet Given Name Nam, while viewing Songs.)The genuine desires of ordinary people (above all for reunification) are placed in a broader historical context, but explored with the utmost respect. There is no trace of Western capitalist triumphalism in Yoo’s film. Perhaps this is why Songs from the North cannot find its place within a showcase like City to City, partially sponsored by the South Korean Consulate. Instead, we get a documentary in open thrall to the Hyundai Corporation.