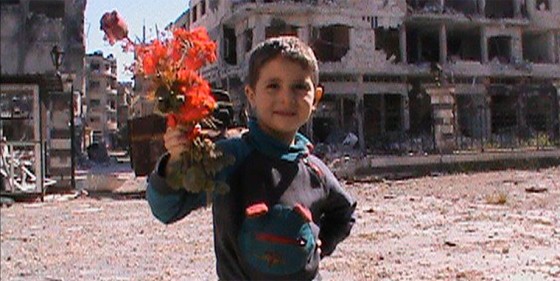 Susan Sontag once observed how war photography enables us to both regard and consume the “pain of others.” Ossama Mohammed and Wiam Simav Bedrixian’s powerful film confronts this quandary head on by challenging its audience not to be numbed by a series of horrific images, most of them culled from mobile-phone videos posted on the internet that are artfully edited into a unexpurgated chronicle of the atrocities committed by government forces during the ongoing Syrian civil war. Much of the documentary’s aesthetic impact is attributable to the contrast between the macabre footage—dissidents raped and tortured, corpses left unattended in the street, maimed cats struggling to survive—and Mohammed’s plaintive voiceover, wherein he berates himself for taking refuge in Paris. The footage shot by Bedrixian, while in no way negating the visceral impact of the carnage, humanizes the conflict by focusing on some of its youngest victims. A sequence featuring an ingenuous young boy named Omar, whose fresh-faced curiosity cannot disguise his anxiety concerning the snipers that lurk in the background, is an overt, somewhat questionable effort to inject pathos into a litany of atrocities. A cri de coeur that implores the West to ponder the consequences of a conflict for which there are no facile panaceas, Silvered Water invites us to immerse ourselves in the unimaginable while making us equally cognizant of our political impotence.