TIFF 2014 | What We Do in the Shadows (Jemaine Clement and Taika Waititi, New Zealand) — Midnight Madness 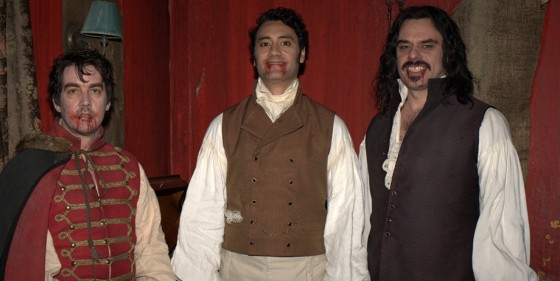 Less a spinoff of HBO’s well-loved Flight of the Conchords than a large step up by the New Zealand co-writing, -directing and -starring team of Jemaine Clement and Taika Waititi after their terminally twee Eagle vs. Shark and too-cute coming-of-age tale Boy, What We Do in the Shadows invites us to into a household of vampires in the Greater Wellington Area that’s rife with the petty conflicts common to any set of roommates. And as rich as many of the characters are in this enormously witty desecration of bloodsucker tropes, it’s the token human who may be the greatest evidence of the film’s particular genius.

A militantly low-key IT guy, Stu (Stuart Rutherford) initially seems dull as a post and only present to serve as a joke about the reluctance of new vamp Nick (Cori Gonzalez-Macuer) to eat his best mate. Indeed, poor Stu exudes none of the glamour of the four senior creatures of the night who are the mock-doc’s primary subjects: Viago (Waititi), an 18th-century dandy who’s so prissy that he lays out newspapers in hopes of minimizing the mess that results from his still-grisly kills; Vladislav (Clement), a hirsute Eastern European brute who goes more for the sadistic side of the vamp lifestyle but admits that it comes from an emotionally unhappy place; Deacon (Jonathan Brugh), the youngest vampire in the house until Nick is turned; and Petyr (Ben Fransham), an 8,000-year-old Nosferatu look-alike that even the others avoid. All of them have a considerable amount of trouble enticing fresh prey at Wellington’s hotspots to come back to the flat, due to the fact that most bouncers seem well aware of the vampires’ invite-only restriction.

Since Nick’s efforts to insinuate himself into the vampire social strata go so poorly, it’s understandable that the rest of the group would develop a greater appreciation for Stu. (Nearly as funny is the other primary human character, an increasingly fed-up “familiar” who’s been promised immortality by Deacon but has essentially been enslaved to do the laundry.) The vamps’ affection for their human co-habitant is evidence of the film’s disarming sweetness and surprising generosity of spirit, two qualities that aren’t exactly common to horror comedies. They also help freshen up the potentially played-out mockumentary aspects, though it’s a canny move by Clement and Waititi to pattern their effort not after the usual post-Paranormal Activity found-footage crud but the MTV-verité of The Real World, complete with the soap-operatic treatment of the plotlines and interpersonal dynamics. But where the team most succeeds is the abundance of exquisitely staged gags and subtler comic pleasures that remain deeply rooted in the suspicion that the prospect of eternal life will mostly yield limitless opportunities to mope around and then embarrass ourselves at parties.