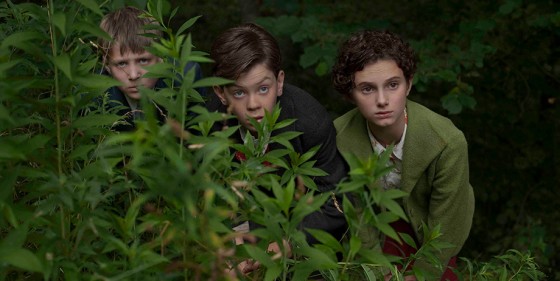 This fairly mediocre period piece is what we might call a double-whammy, given that it practically begs for critics to grade it on a curve. Not only is it a perfectly edifying film about World War II and the Nazis, it’s a film for and about children, which presumably excuses the extremely broad strokes of the plot. And I mean broad: any halfway attentive viewer above the age of ten will know exactly how Secrets is going to go down by the 20-minute mark. Set during the German occupation of the Netherlands, we get a glimpse of life in a small Dutch town through the eyes of two young boys. Tuur (Maas Bronkhuyzen) is the bright but unruly son of liberals who are keeping their heads down while quietly helping the Resistance; his best friend Lambert (Joes Brauers) is the son of a high-profile collaborator. Their relationship is complicated not only by politics but by the arrival of a mysterious young girl, Maartje (Pippa Allen). What is her secret? Why isn’t she staying with her parents? Why does she cower as the trains go by? Why does she politely decline a bite of pork sausage? You get the idea. One might have hoped for something more than the usual stately piousness from Bots, the showrunner for Nickelodeon Europe’s clever, darkly comic Egyptology serial House of Anubis. But perhaps for a Dutchman adapting a best-selling non-fiction novel, there’s simply too much at stake. (The widespread collaboration with the Nazis remains a touchy subject in the Netherlands.) Still, if perfectly average films like Secrets of War remain TIFF Kids’ stock in trade, critics will continue to ignore the section altogether.