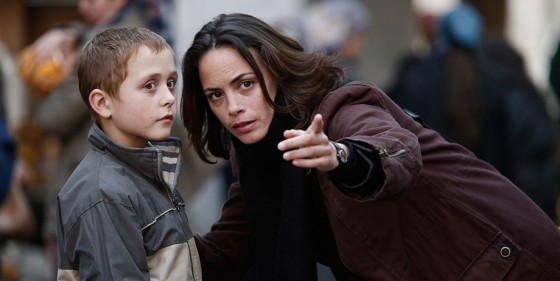 The Search is what happens when winning awards supersedes making cinema. It’s what happens when pastiche is mistaken for art; when Bérénice Bejo and Annette Benning have Best Actress prizes on their résumés; when the context informing a movie is only other movies. It’s the kind of war picture you get when your show-stopping set piece is a taciturn little boy busting moves to the Bee Gees’ “You Should Be Dancing.” It’s a film that only ends up on a film festival’s competition slate when grandiosity trumps modesty a priori; a film that is a filmmaker’s follow-up to The Artist when, after Stanley Kubrick, genre versatility is equated with range; a film that arrives at a time when we are so jaded about traditional narrative structures that layering many of them on top of one another is considered a smart variation. It’s what a film looks like when narrative is valued over images; when it is expected that images be “moving” and “powerful”; when a man’s creative output is a response to others’ expectations of him rather than an opportunity to announce his own expectations of others. The Search is about how the 21st-century spectator is less alienated by brutality than by beauty; it’s about the futility of being optimistic about one’s own future; and it’s about how consciously looking for something will invariably insure that you will never, ever find it.