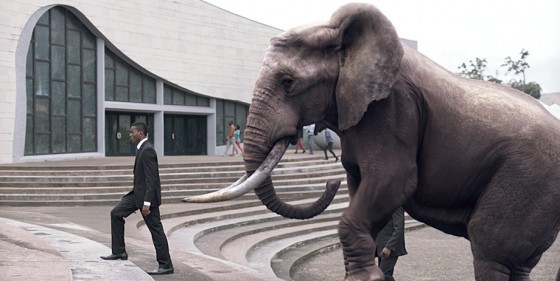 The only overtly political film in this year’s Un Certain Regard section in Cannes came from Ivorian filmmaker Philippe Lacôte in the form of his fiction debut, Run. Unfortunate Forrest Gump (1994) resemblance aside (“Ever since I was young, people would call me Run,” spoken in voiceover by the film’s protagonist over the image of him—egad—running, before jumping back twenty years to the story of his youth), Lacôte’s film is a lucid and weirdly fashionable political drama that effectively fulfills its double duties of expounding on the Ivory Coast’s recent unrest for the largely uninformed festival audience it targets, while also assembling a moderately affecting coming-of-age narrative.

After opening the picture on an apparent assassination of the nation’s prime minister, Run leaps between present and flashback, leading back up to that introductory act of violence. For his part, Lacôte does a fine job of conflating his lead’s descent into militant extremism against the wistful nostalgia he carries for his youth (Run’s stint as the right-hand man for the morbidly obese Gladys la mangeuse—who makes her living by eating buckets of rice and chicken in front of adoring yet impoverished village people who bewilderingly throw money at her so she can eat food that they’re too poor to afford—is particularly sweet and disgusting). Inserting numerous beautiful, if trendy, lyrical interjections—a cloud of locusts consuming an open field, a night sky whose stars all synchronously fall to the earth, a massive symbolic elephant ascending courtyard steps—Lacôte locates a sublime beauty in the ascension from innocence to ferocity.