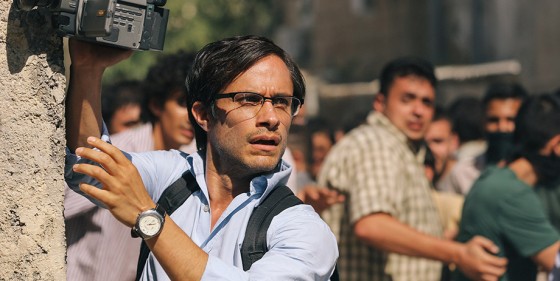 Political film without a politics of filmmaking, Jon Stewarts’s earnest directorial debut repurposes journalist Maziar Bahari’s memoir about having spent 118 days in Tehran’s notorious Evin prison after he was accused of being an American spy into a palatable polemic about Iran’s theocratic rule circa the 2009 elections. The London-based, Iranian-born Bahari returns to his native home to cover the Ahmadinejad-Mousavi run-off, an election fraught with alleged voting fraud that sparked protest throughout the country and fuelled the Reformist movement.

That Bahari is played by an ever-alert but never histrionic Gael García Bernal (suspensions of disbelief include a Mexican posing as Persian, and the fact that scarcely a word of Farsi is uttered) assures an affability quotient to an already sympathetic subject. While this characterization pays dividends in the film’s first half, which offers a more than perfunctory portrait of the journalist taking to the streets of Tehran and elsewhere in the midst of escalating electoral fervour, it forsakes the dynamism of Bahari’s memoir in the film’s second act, a dramatization of imprisonment and interrogation that is rooted in reality but plays as a quasi-harrowing rhetorical “nightmare” from which one is only too certain of waking. Blame it on the efficacy of black humour, a staple of Stewart’s repertoire, but the psychological perversities endured by Bahari in captivity which his memoir more vulnerably exposed (e.g., his desire to be beaten for the sake of human contact) are elided in favour of the tale’s more absurdist elements.
The cultural revolution might be tweeted, with the strains of Leonard Cohen drowning out the rosewater scent of an historical piousness, but the dignified resistance of victims like Bahari (and those many still imprisoned) ought to be etched into our conscience far longer than just an Oscar season. But then again, credit Rosewater for troubling itself over just what makes the axis, evil or otherwise, spin.