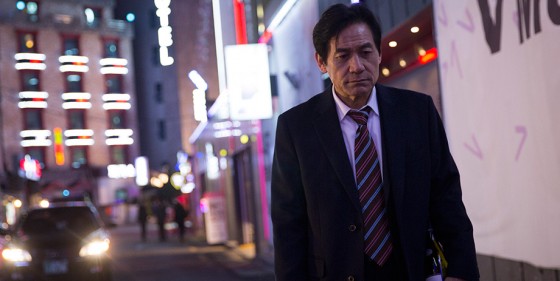 A number of TIFF 14’s Korean films are about the working poor or the criminal class eking out an existence on the mean streets of Seoul. Judging from Hwajang, a.k.a. Revivre,being on top of the capitalist mountain is no guarantee of happiness (although I’m sure any peasant would be glad to give it a shot). The latest from Im Kwon-taek finds veteran actor Ahn Sung-kee (the 1960 Housemaid, Nowhere to Hide, Im’s own Chihwaseon)assuming the role of Director Oh, head of marketing at Adelaide, a major cosmetics firm. This gentleman of a certain age is struggling to balance his work demands with the care of his wife, who is in hospital dying of a brain tumour. Meanwhile, he is nursing an erotic fixation on a much-younger employee, Ms. Choo (Kim Ho-jung), not as something to act upon but as a mental distraction from the turmoil in his day-to-day life. Even though Im employs non-linear chronology (the film begins with the wife’s death), there’s nothing particularly flashy about his directorial approach. What Im ultimately achieves is a “revival” of Revivre’s run-of-the-mill subject matter through an understated formal exactitude, befitting this Korean axiom’s 102nd film. While no one will mistake this for Haneke’s Amour (a good thing in my book), Revivre is impressively clear-eyed about aging, illness and death, from the limits of colleagues’ sympathy when major projects are on the line to the mutual effort involved in keeping a sex life going in the face of physical deterioration. This is 60.