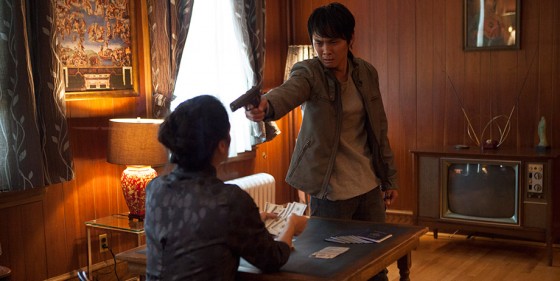 This film is credited as an American production through the enabling of producer Martin Scorsese, and is set in the Flatbush section of Queens during the 1980s, when Mainland Chinese immigrants flocked there and young gangs flourished—as did human trafficking, centred there on the notorious “snakehead” Sister Ping. But this is all circumstantial: the film is really a Hong Kong effort transposed to New York. (Scorsese may have involved himself in this production from a sense of obligation: The Departed,his 2007 remake of Infernal Affairs, earned him four Academy Awards and a much-needed late-career boost. Somebody probably also thought Lau capable of the lightness and sting of a Goodfellas, and Lau even adds Ray Liotta to the cast as an FBI agent—though all that is asked of him is to pop up now and again as a bystander.) Co-director Andrew Lau (Andrew Loo, the other credited Green Dragons director, is a cipher, an assistant in all but name) shot and co-directed Infernal Affairs and its two sequels with Alan Mak; when they finished the Infernal trilogy, the partnership broke apart. Neither has again caught lightning in a bottle, probably because neither found a screenwriter capable of Infernal scripter Felix Chang’s cunning and intricacy. Mak at least has made a pair of solid HK genre efforts with the first two Overheard films (the third is tired); as for Lau, while he has done some very good martial-arts cinematography, his direction has been drifting back towards the level of his Young and Dangerous kid gangster series, those crude, ludicrous, overwrought and immensely popular examples of a 1990s HK crime cinema in decline, after John Woo left for Hollywood and before Johnnie To set new standards for the genre a few years later. With Green Dragons, his degeneration seems complete.

Despite the prestige boost of that Scorsese imprimatur, Green Dragons smacks of a certain desperation. It crams too many plot lines into too small a space, and then takes more screen time than it should with undermotivated, hyper-violent but essentially static set pieces. The economies of even competent (much less very good) HK plotting and the characteristic exuberance of HK action filmmaking are irretrievably lost to clutter and exaggeration. Worst, though, is that Lau has abandoned the deep-seated decorum of HK star and character film acting, by which I mean its emotional restraint, wit, and physical grace. Green Dragons is alternately overwrought and arch, never finding the right tone for either a chill HK gangster thriller (To’s forte) or a hyperbolic gangland melodrama (Woo’s ’80s game). The film just careens from scene to scene, until an army of cops comes from nowhere and ends it all (or almost all—there is a ridiculous coda). Though shot in Queens and featuring recurring riverside scenes with Manhattan in the unreachable distance and lead Justin Chon looking fecklessly for his future, Green Dragons swiftlyturns its novel setting into a lacquered Bento box with a lot of guns and knives and amazingly horrid ’80s hair.