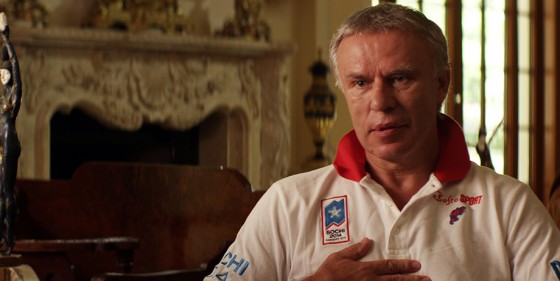 American director Gabe Polsky’s timing really couldn’t have been worse. Arriving in Cannes only three months after the Berlin debut of Corneliu Porumboiu’s The Second Game—which delivered a radically minimal yet effective variation on the politically-minded sports documentary as Porumboiu has his father, a former soccer referee, provide commentary over the entire broadcast of a 1988 game he called between the Dinamo (managed by Romania’s Internal Affairs Ministry) and the Steaua (managed by the Romanian Army)—Red Army offers an account of the Soviet Union’s national hockey team (called, naturally, Red Army) at the height of the Cold War. Relying on talking-head interviews, expository voiceover, and a linear assemblage of historical events, this is a documentary whose only (infinitesimal) value is to generate nostalgia in those who lived through it or inform those who didn’t. In the realm of possible decisions one could make when it comes to sports docs, you can’t get more conventional than this. So what can one conclude when this kind of formally vacuous cinema-as-information is able to screen in a world-renowned film festival, when it is still fresh in our minds that we can have politically relevant, historically educational non-fiction cinema presented in a mode that challenges our relationships to aesthetics as well as our roles as spectators? It’s topical journalism for its own sake, a narrative waiting for someone to report it again—not that Polsky takes journalism itself very seriously anyway, as observed in the off-putting initial interview with Red Army captain Slava Fetisov, which posits assholish pestering as the way to documentary truth.