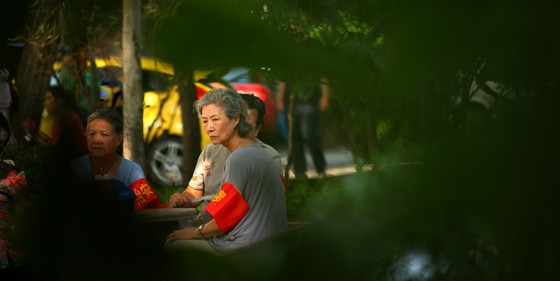 Deng, an aging but relatively sprightly old woman, spends her retirement taking care of her house and her grown-up children, who nonetheless appear to be better off when she is not around (one is busy building a successful heterosexual family, the other slacking about in front of the computer). Only the ghost of her late husband keep her company, while a menacing red phone keeps ringing. Every time she picks it up, no one answers. From anonymous phone calls to bricks thrown at her window, garbage piled up outside her doorstep to mysterious murders in the neighborhood, Deng starts to have a rather stressful life for a woman of her age. Helped by her children and the authorities, she will find out the author of the abovementioned “pranks,” a young boy, and will start to be haunted by his real and imagined presence. Once she finds out who the young boy actually is, Deng will have to return to her murky past both physically (no time-travelling, she simply goes back to the place where she was born) and in her memories to confront a dark and painful secret.

It might be that the discouraging average of the films watched in Venice made this film seem better than it actually is, but Red Amnesia did feel like a reasonably good movie. The acting is solid, the story well-paced and the characters are people you actually don’t mind listening to and looking at rather than feeling like punching them. Perhaps slightly axiomatic as far as its story is concerned, Wang Xiaoshuai’s film is anything but obvious when it comes to its conclusions. A complex and nuanced picture about the consequences of difficult choices emerges from a film that is at least unpretentious, more inclined to understand than to pontificate.