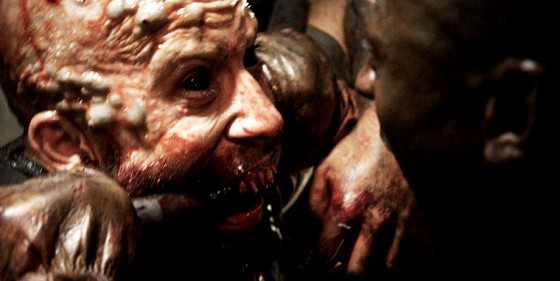 Call it the [REC] of the Edmund Fitzgerald. This third and (I’m guessing) worst sequel to the 2007 Spanish found-footage horror flick is set at sea, for no good reason other than that the franchise hasn’t gone there yet. So a year after World War Z gave us Zombies on a Plane, here we get Zombies on a Boat, all hell-bent on sinking their teeth into the intrepid investigative reporter (Manuela Velasco) who survived the first, apartment-bound installment more or less intact. Her reward for being so consistently bite-proof is being chased through narrow corridors by howling stuntmen in gore makeup while wearing a tank-top, which is probably about as boring for the character (and the actress) as it is for the audience. Even director Jaume Balaguero seems disconnected from the action, abandoning the camcorder textures that gave the original its trendy raison d’être (and its title) and introducing some halfhearted fanboy pandering in the form of a paunchy computer hacker whose destiny is to get the girl—a schlubby surrogate for audience fantasies. Atrociously paced and plotted and scored, this is basically VOD dreck taking up space at a major international film festival.