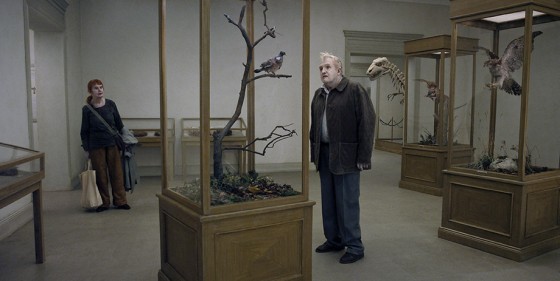 A Pigeon Sat on a Branch Reflecting on Existence is Roy Andersson’s third installment in his trilogy of films “about being a human being.” Regrettably, said trilogy has been on a downward trajectory from the original brilliance of Songs from the Second Floor through the less impressive but still enjoyable You, the Living and now ends, with Pigeon, on a decidedly less inspired note. Andersson’s trademark visual complexion is still here: listless beiges and stone-washed blues graced with a dispiritingly unearthly pallour. What is missing, unfortunately, is his deliciously dry humour. In outline, the absurdist charge of Anderson’s earlier work is still present here, but we can’t really feel the glacial warmth of his affectionate misanthropy. Pigeon feels like Andersson doing a diligent impression of himself: it’s a play without a playwright, a scream without a sound. Even the most inspired moments are burdened by the weight of worn-out contrivances, still brilliant but without that enlivening spark; e.g., the torture blues machine, a giant metallic cylinder fitted out with gramophone horns and then filled with chained slaves by colonial soldiers. When flames start warming the cylinder up, a beautiful wailing sound start coming out of the infernal machine, while a zombie-like crowd of diners stares in awe from a distance—the same distance the director has travelled between his inventive first installment and this disappointing epilogue.