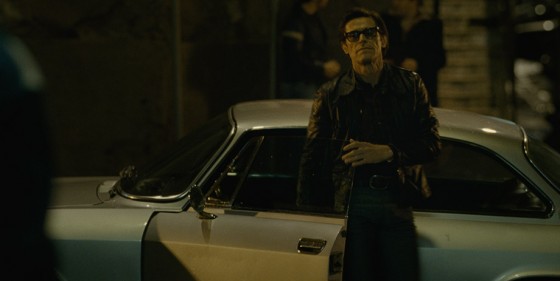 Willem Dafoe takes on Pasolini’s last three days on earth in a difficult, almost impossible film that Abel Ferrara directs with respectful audacity. Seventy-two hours in the life of the heretical Catholic and erotic Marxist poet, columnist, theorist, filmmaker, and tumultuous and gentle earthling. We get to see enacted glimpses of his unfinished book Oil, a towering investigation into the occultural economic interests that governed his native Italy. Going back upstream on the flows of black gold Pasolini uncovered uncomfortable truths which, without necessarily validating conspiracy theories, had undoubtedly disturbed people in very high places. Porno-Teo-Kolossal, the director’s next project after Salò, comes to life through Ferrara’s images in what is possibly the weakest moment in the film. The great Neapolitan playwright and actor Eduardo de Filippo, who was to star in the film, is played by Pasolini regular Ninetto Davoli, while Italian poster boy Riccardo Scamarcio plays the young Ninetto Davoli.

Ferrara’s film is a fractal mosaic evoking the multiverse of Pasolini’s volcanic mind and life, his “sinful” sacrality and iconoclastic precognition (“Consumerism is an even worse form of fascism”). Transitorily abstract despite its predetermined chronological terminus, the film avoids historical contextualization and opts instead for an inner excursion into the projects, ghosts, friendships, passions, and professional commitments that animated Pasolini’s life until his very brutal and still mysterious end. Pasolini, a director who used the iconographic vigour of bodies to articulate a profound, theoretical indictment of his days and times is here depicted by a director, Ferrara, who, almost inversely, builds instinctual theorems with his guts and intestinal genius. Yet it is precisely the visceral dimension of Ferrara’s cinema that goes perplexingly missing in this film, possibly due to the deference that approaching such a towering figure inevitably involves. The torment and poetic rage of Pasolini struggle to surface in a film that, especially when compared to Ferrara’s standards, feels somehow detached and opaque. It was a difficult film to make, and if Ferrara failed, it is indeed a very noble and courageous failure.