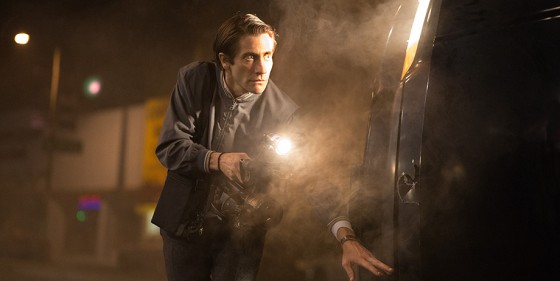 “I’m not going to hire a fucking thief,” exclaims a character early on in Nightcrawler, and while the name-check of Michael Mann’s debut feature is likely entirely coincidental, it serves to place Dan Gilroy’s debut feature in the proper context. As in Mann’s Heat, Los Angeles plays itself here, a star turn that’s all the more striking for being so thoroughly de-glammed; as shot by the great Robert Elswit, the city doesn’t shimmer so much as bleed out in ugly neon streaks. James Newton Howard’s uncharacteristically tangerine-dreamy score hints at an ’80s influence as well. And if Gilroy’s screenplay about a sociopathically ambitious freelance crime-scene photographer (Jake Gyllenhaal) who exploits a local news producer’s (Rene Russo) fondness for gory details had been produced in the 1980s, its critique of a bloodthirsty media culture might even have looked prescient. As it is, however, it’s familiar bordering on retrograde, even unto having a scene where someone explains that “if it bleeds, it leads,” a maxim that we all remember from the first day of J-School, or maybe the trailer for 15 Minutes (where it came out in the dulcet tones of Kelsey Grammer). Gyllenhaal is a resourceful actor, and he’s seriously entertaining as a guy whose malevolence reveals itself in increments, hidden behind well-practiced politesse; it’s exactly how a smart loner might try to talk to other people, and it gives the early scenes some tension. (He’s even creepier keeping his eyes wide open instead of blinking incessantly à la Prisoners). Like most genre movies, Nightcrawler gets worse as it goes along, but its scuzzy, fetid atmosphere lingers almost all the way to the final buzzer.