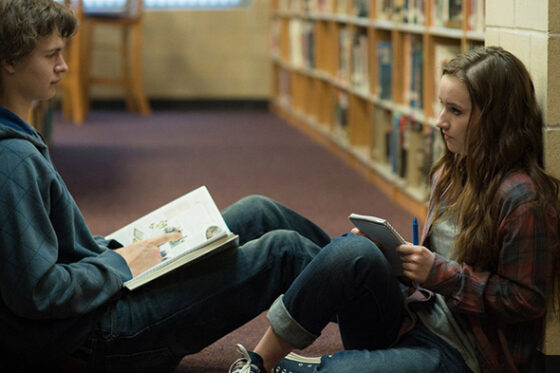 With Labor Day, Jason Reitman announced his intentions to become the new Sam Mendes. People should be careful what they wish for. Men, Women & Children could have easily been titled Fall Prestige Picture, or maybe Oscar Movie—you know, something with that nice, concise Seltzman/Friedberg ring. But that would promise a comedy, and this is definitely not that. Rather, it’s an ostensibly trenchant examination of how social media breeds all sorts of antisocial (or socially retarded) behavior, which is a rich subject for a contemporary drama. The problem isn’t the topic, or the cast (which includes such good eggs as Dean Norris, Judy Greer and J.K. Simmons alongside topliners Adam Sandler and Jennifer Garner), or even Reitman’s increasingly sententious filmmaking style, which is a natural outgrowth of a one-time “satirist’s” bid for “artistic seriousness” and “maturity” (all quotation marks are mine, though he’s surely talked about his own this way; perhaps there is a video online somewhere). No, the problem is that despite confining all its action to a small-town high school and the homes of a few of its students, Men, Women & Children feels desperately dispersed, throwing up multiple plotlines—a moody football star ditches the team and gets a girlfriend; a husband and wife act independently of one another to curb their mutual marital boredom; a failed actress tries to mold her sexpot daughter into a media star—all held together, rhetorically and visually, by a web of iPhone text bubbles. Basically, this movie is trying to live up to its all-encompassing title—and its tony appropriation of Carl Sagan’s book Pale Blue Dot: A Vision of the Human Future in Space—by addressing as many aspects of modern life and relationships as possible, simultaneously and with an equal level of emphasis, and as a result it unsatisfactorily glosses over all of them. There are some predictably atrocious moments, but nothing on the order of the peach-pie bake in Labor Day, and while the dramaturgy is laughably bland—two black characters of minor importance and one gay guy in an otherwise snake-hipped, well-complexioned Anglo ensemble—the repugnant neo-conservatism of Thank You For Smoking and Up in the Air is barely felt at all. Sad to say but it seems we can’t even count on this filmmaker for LOLs (that’s web vernacular, ICYDK) anymore.