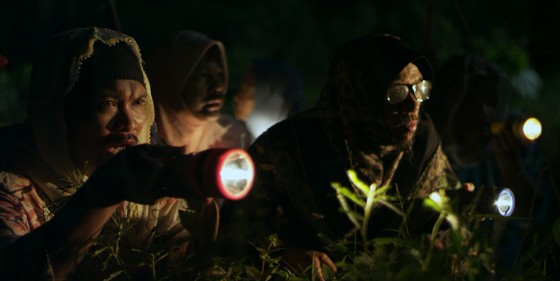 Liew Seng Tat’s eagerly awaited follow up to his award-winning Flower in the Pocket sets out to be a boisterous comedy of rural cross-dressing and ghostly hauntings, but it has fascinating, somewhat disguised undercurrents suggesting something more serious. Pak Awang (a magisterial Wan Hanafi Su) is marrying off his daughter, who has returned from the big city to her Malaysian village. He has decided to transport a dilapidated white-washed house (called “the American House” because it’s white, apparently) from deep in the jungle to the village as her gift, and enlisted a hard-working if none-too-bright brigade of village men (rather flatly comic yokels, unfortunately) to carry it out on poles. But ancient suspicions and prejudices lurk, ready to leap out at the slightest provocation. In this case the provocation is an African peddler on the run, who just happens to take refuge in the house as it’s being carried through the jungle. He’s spotted by junkie cum would-be-transvestite Wan and taken to be “The Oily Man,” some indigenous species of ghost. Panic ensues, and the villagers try, bumblingly and hilariously, with the occasional lapse into overly broad comedy, to deal with a succession of alarming events and personages which a disappearing camel and a money-minded exorcist.

Though Liew’s film looks to be an amusing ghost tale, well told and smoothly shot, lurking beneath the surface are serious issues of homophobia, xenophobia, and political manipulation, conveyed with humour through a cleverly constructed allegory that should slip through Malaysian censorship and illuminate local (and international) audiences seduced by the good fun of it all.