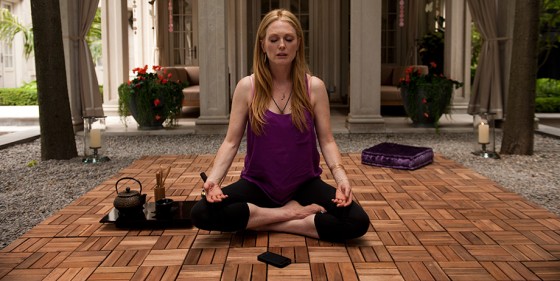 David Cronenberg’s worst movie in fifteen years finds him playing his usual home game on foreign turf. Los Angeles in Maps to the Stars feels just as alienated and under-populated as New York in Cosmopolis (2012), which is of course the point—a point that was once novel but is getting tiresome. Also tiresome is the idea that by meeting a subpar, externally generated script more or less halfway and then nudging it gently into the direction of his pet obsessions, our hero is making auteur movies par excellence. It wasn’t true in Eastern Promises (2007),with its tricked-up thriller plot courtesy of Steven Knight; it wasn’t true in A Dangerous Method (2011), with Christopher Hampton’s schematic theatrics; and it’s surely not true with Bruce Wagner’s moldy old jokes about Hollywood Hell, which the director treats with the detached contempt they deserve without really indicating why anybody (himself included) should care about the jokes themselves or about their being treated with such expertly detached contempt. Nobody put a gun to David Cronenberg’s head, Brundlefly-style, and forced him to make this movie.

Cannes winner Julianne Moore plays a monstrous menopausal movie star afraid of turning into Mommie Dearest—literally, since her mom was a pedophiliac starlet who won a Golden Globe (a skimpy cameo for Sarah Gadon); Mia Wiaskowska plays her new PA, who has some fetching burn scars and an incestuous backstory of her own; Robert Pattinson plays a poor limousine driver almost as well as he played a rich limousine passenger; and Shia LaBeouf dead ringer Evan Bird plays a child star who is less believably obnoxious, coddled and screwed up than the one in Childstar (2004), which had funnier jokes about the film industry. There’s some sociological stuff about the tragic vulnerability of showbiz kids, and some Freudian stuff about the pull of parent-child attraction, and some Jungian stuff about collective guilt and anxiety, and some sub-Michael Tolkin digs at casting-couch practices, and a couple of good nasty lines (like the one about whether or not a Make-a-Wish girl has AIDS). Cronenberg’s sole directorial innovation is to consistently isolate his characters in one-shots, which is effective but hardly a rousing example of late style. Apologists will probably find enough in here to make the case, but it’s a vulgar auteurism indeed that has to keep saying it’s sorry.