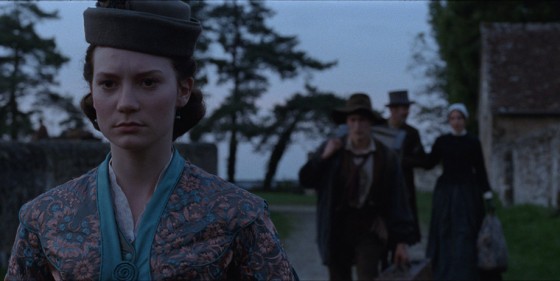 Renoir, Chabrol, Oliveira and Minnelli, among a host of others, have all taken a cinematic crack at Flaubert’s realist chef d’oeuvre, but surprisingly, the young French director Sophie Barthes—for whom the book is part of an inherited cultural DNA—is the first woman to adapt the original “modern realist” novel, and not for nothing. Barthes exhumes the intrinsically proto-feminist appeal of Emma B’s solutions to the stifling inertia of a sensually enervating marriage (o a reputable doctor who attends to all bodies but hers. As channelled through Mia Wasikowska’s ambiguous embodiment, Barthes’ Emma is both reluctant and unrepentant in her adulterous affairs. It’s a sympathetic rather than critical treatment, but none the less cautionary for conflating Emma’s self- actualization with her further disillusionment and inevitable entrapment. Such is the lasting value of Flaubert’s precision in describing the eternally imprecise condition of longing.

Barthes’ points of departure condense Emma’s circumscribed habitat, both material and temporal: her exquisite attempts to dress the part effectively colour-code her erotic life (while sinking her into debt with a dandy creditor gamely named L’Heureux), as time bears down crushingly (Emma seizes in vain the metronomic dread of the grandfather clock). Tonally, the naturalistic look and not too-affected delivery create a bristling modern vibe that’s not willfully anachronistic (no Converse sneakers for Emma). Most crucially and delectably, it is language—Flaubert’s mots précises—that sways with seductive power and portent, which Barthes taps for all its symbolic suggestion. Indeed, the vicissitudes of desire leave even the most ardent romantics sniffing for orange blossoms beneath an apple tree. Perpetually pleasant-looking, the film—like Emma—revels in appearances but is about feeling unpleasant, even after the corset is unbound. Bovary, c’est nous.